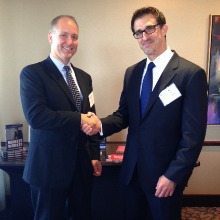 Leadership coach Steve Gaffney, a speaker and communication expert, last week spoke to WashingtonExec Federal Business Council members about communicating honestly during the latest in a series of breakfast roundtable discussions hosted at the Tower Club in Tysons Corner.

Gaffney, who authored Honesty Works! and Just Be Honest, told executives that a lack of “open, effective honest communication” is the obstacle that most commonly holds back businesses from their true potential.

The key to communicating honestly? Understanding that it’s not about what people are saying, but what they are not saying. The omission comes most often, Gaffney said, from a place of fear that effective communicators avoid by attempting to make individuals feel safe and comfortable.

He encouraged attendees wishing to improve their communication to differentiate between “noticing” and “imagining” — distinctions individuals often collapse when formulating opinions about their peers. The “notice” involves three categories of facts — appearance, actions, words — that we discern when exchanging information with people. “Imagining” is that which surfaces in the absence of notice. People in the absence of facts, Gaffney said, begin to imagine — or make facts up — about their interactions, forgetting that they merely imagined the perceptions.

The solution? Realize that you may be wrong, Gaffney said. The presumption forces you to ask more questions thereby leading to more effective communication. Gaffney said question-posing leads to the acquisition of well-rounded facts which leads to improved decision-making and a better professional and personal life.

Steve Woolwine, the senior vice president of human resources at URS Corporation, said he benefited greatly from the session.

“Steven’s session on “Notice vs. Imagine” was captivating and extremely insightful,” Woolwine said. “I found his strategies to be overwhelming useful and he truly delivered a practical guide for improving communication techniques which can be immediately put into use.”

Gaffney also spoke to the WashingtonExec Executive Assistant Committee in January. Read about that here. 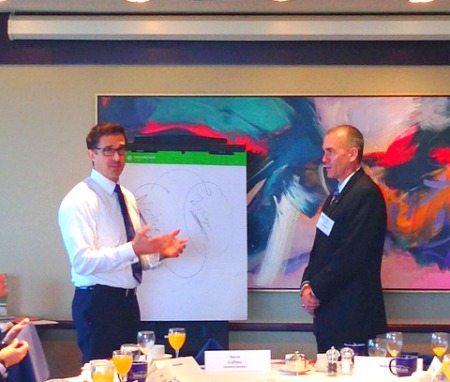