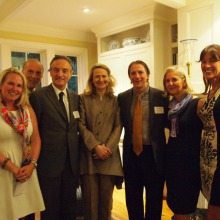 In attendance at both events were Diane Schaefer, Choral Arts Board Chair and Senior Vice President /Financial Advisor of RBC Wealth Management; Olwen Pongrace, 2013 Gala Chair and member of the Board; Scott Tucker and Debra Kraft, Choral Arts’ Artistic and Executive Directors.

Both receptions featured a performance of Italian Madrigals in honor of the Honorary Patrons of this year’s Gala by members of the Choral Arts Chorus, including Erin Crowley, Julie Huang, Michael Boyce, and Brandon Straub, Choral Arts’ Associate Conductor and Pianist.

In addition to attending the 2013 Holiday Concert and Gala, the Ambassador of Italy, encouraged people to attend the first concert of Choral Arts’ 2013-2014 season: Legacy and Life: A Musical and Visual Reflection.

“As you know it is the 200th anniversary of the birth of the great Italian composer Giuseppe Verdi. Choral Arts has connected his beautiful and dramatic Requiem to the 50th anniversary of the assassination of John F. Kennedy, said the Ambassador of Italy. “I am excited to experience this innovative programming of a great Italian choral masterwork.”

Legacy and Life will be performed on Sunday, November 10, 2013 at 4:00 pm at the Kennedy Center Concert Hall.

For more on the Choral Arts Gala this winter, click here.