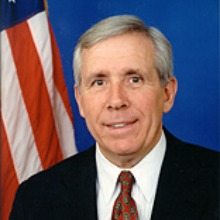 Wolf, a longtime supporter of STEM (Science, Technology, Engineering and Mathematics) education and chairman of the House Appropriations subcommittee that funds many of the nation’s science programs, is co-hosting the fair with the National Science Foundation (NSF).

“The fair is aimed at encouraging young people to pursue careers in science, technology, engineering and math, which are the surest career paths to an exciting, successful career and a strong, competitive economy,” said Wolf.

According to Wolf, the FY 2014 Commerce Justice Science bill recently passed and includes $1 billion for STEM education programs across the NSF, NASA and NOAA. The bill calls on the Office of Science and Technology Policy (OSTP) to develop a Web site where STEM curricula from all federal agencies could be consolidated and made free for the public.

Wolf said this would improve the ability of teachers to identify and use existing data on effective STEM practices, an idea that grew out of a review of STEM instruction Congress required OSTP to conduct last year. “Our plan to create a one-stop Web site is an important step forward for bolstering STEM education in America in order to educate our children to the fullest, boost our economy and remain competitive on a global stage,” said Wolf.

The bill also provides $3.6 billion for NASA exploration and $4.8 billion for NASA science programs to work in a partnership with youth service organizations, including those with a nationwide footprint, to engage K-12 students in STEM-related activities and to help encourage those students to pursue future STEM careers in order to ensure a globally competitive economy. Addressing underrepresented populations in STEM programs and in the STEM workforce, the bill provides funding for the Historically Black Colleges and Universities Undergraduate Program, the Louis Stokes Alliance for Minority Participation and the Tribal Colleges and Universities Program.

The bill provides the National Institute of Standards and Technology (NIST) with $784 million in funding to help advance U.S. competitiveness, innovation, and economic growth, a decrease of $25 million below last year’s levels. The bill also encourages NSF to promote partnership opportunities between STEM-focused schools and universities or non-profit institutions, and provides NSF with $7 billion to fund core research and education activities including funds for an advanced manufacturing science initiative for research in cyber security and cyber infrastructure.

Wolf said the bill is 5.6 percent below fiscal year 2013 levels and 7.4 percent below the president’s budget request. It terminates 39 programs and has saved more than $500 million from FY 2013.

The fair is free and open to the public.  For more information on the fair, click here.