You are at:Home»Execs to Know»OnPoint Consulting Inc.’s Rusty Lingenfelter on Company’s Green IT Commitment, STEM-Related Efforts and Employee Loyalty 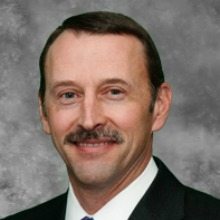 Rusty Lingenfelter is a senior IT leader and chief technology officer (CTO) of OnPoint Consulting, Inc., an ISO-registered technology and management consulting federal contractor. His specialties include Program Management, Delivery Operations, and Strategic Leadership. Lingenfelter holds a B.A. in Computer Science & Psychology from Coe College and an M.S. in Industrial Technology, Digital Communications from East Carolina University. He also received an MSS in Strategic Studies from the United States Army War College, and is expected to receive a DBA in Strategy and Innovation from Capella Universiy in 2015.

Lingenfelter spoke to WashingtonExec about OnPoint, what makes the company stand out, maintaining employee loyalty, Green IT, and what federal budget cuts means to him as a small business contractor.

According to Lingenfelter, OnPoint got its start 19 years ago with CEO Shankar Pillai.

“Shankar came from an entrepreneurial family and set up shop in DC to engage in the federal market space,” Lingenfelter explained. “Over time, he has narrowed from pursuing a variety of opportunities to really focusing on the federal IT services market space.”

Lingenfelter said OnPoint stands out because of the high regard for employees and its retention rate.

“Not an insignificant number of our employees get hired by the customer and go into the federal service, and I think that speaks to the quality of the support they are providing,” Lingenfelter said.  “Our retention rate is also right around 90 percent, really unusual in this industry. We’ve established ourselves with some niche skill sets that other companies chose not to invest in. We’ve also invested in and adopted practices to achieve certification in ISO 9000, 20000, 27000 and CMMI ML3. In total, these capabilities are rather unique for a company our size.”

And while the customers regard the employee highly, Lingenfelter said employee loyalty is maintained so well because there is a good level of engagement, where the CEO invests time and effort in maintaining a good relationship with his employees.

“In the military, we would say that ‘the troops do well on what the leader checks,’” Lingenfelter said. “In our terms, it is important that the CEO focuses on employee satisfaction and engagement and our employees are important to the CEO. Our suggestion programs, employee issues – they are not something that goes to a junior person in HR.  They are something that the CEO and all of the leadership team talk about and we follow the issues until they are resolved.

We also are always trying to do better. We are looking into if there is a way we can restructure our benefits that is more meaningful to some of the younger generation folks that work here. Employee engagement and employee satisfaction is a significant part of the discussion that the leadership team must have.”

Lingenfelter also told us about OnPoint’s program, OnPoint Cares, which focuses on supporting STEM-related efforts, with a lot of program support coming from employees. He said employees “will come in and nominate a charity or an effort that requires support, and OnPoint will adopt them.”

Lingenfelter himself said that as a “teacher at heart,” he loves working with kids and seeing them “fired up.”

In addition to OnPoint Cares, OnPoint is also an advocate for green IT.

“We leverage mobile technology in order to get business done versus the traditional approach of driving from point A to point B,” Lingenfelter said. “In the IT space, we are staying abreast advances in computing.  There are some new technologies that are coming out this year that will revolutionize the data center concept as they move to ones that are seeing 300 percent efficiency in terms of power and cutting down the space requirements.

The more we can cut down the total cost of ownership associated with basic office needs, the more we save the customer money, and this also results in less energy usage and less environmental impact.”

And though 2013 may be a year of budget cuts and uncertainty for many, Lingenfelter said OnPoint is not too concerned because in their 19 years of operation, the budget crisis is nothing new.

“Probably one of the benefits of the business we are in is that we are very much into ‘open the door’ kinds of capabilities,” Lingenfelter said. “We are the people doing the basic IT services that make federal offices run.  We are into those core applications that support the mission critical processes of our customers. If those applications don’t run that organization can’t effectively do their work.  I think the customer is impacted in the same way we are, so we are trying to partner with them and give them a solution that allows them to still do business in that kind of environment.”

Lingenfelter, when he’s not busy at work, says a good portion of his time now is spent pursuing his doctorate. Other than that, he keeps busy as a family guy with kids who are a college graduate, college student, and high school student.

And though technology itself has evolved digitally over the years, Lingenfelter said that in the end, he is still a “whiteboard guy.”

“I almost can’t think without the whiteboard to throw things up and change on the fly,” Lingenfelter said. “Maybe the difference is now at the end of the session when I think I’m really on to something. I pull out my iPhone and take a picture of the whiteboard.  That’s probably my last Luddite passion – I had a whiteboard put up in my office and I think I’m the only one, but I still use it.”