You are at:Home»Execs to Know»Q&A with Anthony Robbins: Updating the Federal Network for War Fighters, Citizens 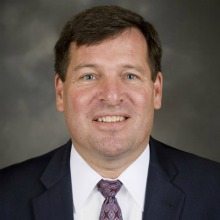 With over 25 years of sales experience, Anthony Robbins leads Brocade‘s federal business unit as vice president. He attended Jacksonville State University on a basketball scholarship, and credits coaches and mentors in federal government for teaching him about working hard and setting goals.

Challenges with outdated data centers and modernizing the cloud were also discussed.

WashingtonExec:  Can you tell me a little bit about your background and your current role?

I’ve been supporting the federal marketplace since 1986. I started at Apple Computer when, back in ’86, we launched Apple’s federal government operation.  From there, I went to Silicon Graphics (SGI) where I established their federal organization and ultimately went on to run worldwide sales.  Following the 16 years at SGI, I spent about four years at Sun Microsystems before they were acquired by Oracle. I left Oracle after a couple of years and I came over to Brocade, where I am today.

“These agencies have many unique missions, but the federal government spends an enormous amount of money on information technology – over $100 billion annually.  This means there is plenty of money to completely modernize the IT infrastructure of the federal government and utilize the cloud to support telework, mobility, and support citizen and warfighter services.”

WashingtonExec:  I’ve read that you think agencies have ignored their network infrastructure.  What other big data challenges are we facing?

Anthony Robbins: I wouldn’t say agencies have ignored their network infrastructure. I would say there hasn’t been as much innovation in the government’s networks as in their commercial counterparts and there is a significant opportunity to increase public sector network capabilities and capacities.

Through network modernization, the federal government can improve support for war fighters and citizen services. The need for this is clear when you look at the number of users on networks, the quantity of devices, the impact of social media, and telework.

The federal government’s network was conceived twenty years ago and in large part implemented more than a decade ago.  Across the federal network there are a lot of products that are either at the end of their service life or no longer DOD-certified. This presents a huge opportunity for the federal government to consider new, best-of-breed products to address the network requirements today and going forward.

These agencies have many unique missions, but the federal government spends an enormous amount of money on information technology – over $100 billion annually.  This means there is plenty of money to completely modernize the IT infrastructure of the federal government and utilize the cloud to support telework, mobility, and support citizen and warfighter services.

WashingtonExec:  What are some practices organizations can develop to promote more efficient use of data centers?

That number is still nowhere near best practices in the private sector. The federal government has a large number of agencies, with great diversity across the Department of Defense and the US Intelligence Community. These agencies have many unique missions, but the federal government spends an enormous amount of money on information technology – over $100 billion annually.  This means there is plenty of money to completely modernize the IT infrastructure of the federal government and utilize the cloud to support telework, mobility, and support citizen and warfighter services.

WashingtonExec:  What are the most common challenges that you hear from your federal customers?

Anthony Robbins: It depends on who you are talking to and what level of employee they are. However, many themes are consistent, like dealing with budgets and changing priorities, while investing in IT for the future.

WashingtonExec:  Big data seems to be the big buzzword for this year.  What do you see as the next big thing?

Anthony Robbins: The next three to five years for the federal government will be all about how agencies enable cloud computing to deliver enterprise services.  A lot of good work has been accomplished thus far, but there is an enormous amount of work still to do, especially when we start contemplating mission-oriented applications.

Modernization in the cloud will consume IT priorities and budgets for at least the next three to five years.

WashingtonExec:  How is your company preparing to “do more with less”?

Anthony Robbins: When I first entered the federal marketplace, discretionary spending happened at a different rate than today.

Nowadays, we look carefully at discretionary spending and ensure the spending relates back to our strategy and creates a competitive advantage for our customers.  We pay very careful attention to the parts of the federal marketplace that we think we can serve best so that we can invest wisely. I would say today, by practice, commercial companies such as ours understand how to spend money carefully.

There is great opportunity in this marketplace. The federal government serves important priorities for national security and DOD missions.

WashingtonExec:  Where do you see Brocade in three to five years?

Anthony Robbins: From a federal standpoint we exist in an area today where our customers want access to applications and data anytime, anywhere.  As a company, the products and technologies we have today will enable a connected world with a large number of users and devices, and an ever increasing quantity of data, to provide fantastic service for the users of that network.

WashingtonExec:  What is the best lesson that you’ve received from a mentor?

Anthony Robbins: I’ve had several mentors — coaches in basketball or senior executives in the federal government. The lesson they’ve provided with the biggest impact is that performance is all about belief in what’s possible and not dwelling on excuses.  It’s all about working hard and setting goals.

WashingtonExec:  What executives in the area do you admire or model your leadership style after?

Anthony Robbins: There are two executives I model my leadership style after. One is Art Money, the former Assistant Secretary of Defense for Command and Control. He was an appointed leader and served as president for a large systems integrator. The other is a retired Admiral who left the federal government and has since passed away. I admired those leaders’ commitment to a sense of mission.

I have found that if you are committed to the federal government’s business and can prove your value to their mission, you serve this community well.  The federal government is a steward of the taxpayer dollar and they take that responsibility seriously.  Some of the leaders that I’ve admired the most are the folks that really figured out how to serve this community.

WashingtonExec:  What traits do you admire in an employee?

Anthony Robbins: I look for employees who are committed to the companies they work for, in our case Brocade, and the customers that they serve. I think those are the people that do best in this industry over the long term.