You are at:Home»Events»General James L. Jones Keynotes 3rd Annual GovCon Distinguished Service Awards: “We Are In A Sputnik Moment” 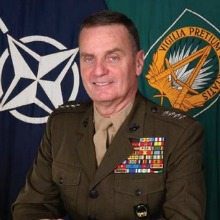 The 3rd annual GovCon Distinguished Service Awards were held by the Fairfax County Chamber of Commerce at the McLean Hilton in Tysons Corner on May 29. The luncheon’s keynote speaker was our nation’s 22nd National Security Advisor and current President of Jones Group International, General James L. Jones.

In his keynote address, General Jones spoke of the current state of our nation and its rapidly changing economic, political and social role in the globalized world.

General Jones welcomed guests by saying, “Many of the rules and regulations written for the business community were written during the cold war, for a different time. During the 20th century we lived in a bi-polar world. One in which the global economy was neither as vigorous  nor as competitive as it is today. In fact, the world has changed. It has gone from being a world that is multi-polar instead of bi-polar, proactive verses reactive, asymmetric in may different ways, and globalized verse nationalized. We should not complain about this, this is the world we actually created.”

General Jones went on to say, “We should welcome the development of nations to compete on the economic playing field, peacefully, collectively, and fairly.”

In his captivating speech, General Jones listed issues that both the United States private and public sector should focus and improve together: cyberwarfare, Africa, China, Kurdistan, Afghanistan and international defense cooperation.

When asked his first and only audience question, General Jones replied:

“We seem to want to demonize the public sector, that Wall Street is bad, that the captains of this industry are corrupt, all the time, we are watching the joblessness climb. In my discussions with people, they ask, “Why are you doing this?” They say, “We are the people who are going to create the jobs.” The government can create jobs, but that is not enough to get us out of this. So I really believe what I said, I really believe that if we are going to continue to be a nation of greatness, if we are going to continue to have the same impact, if we want this nation to play on an equal playing field, we have to recognize that the environment has changed. That we are living in a new century…I honestly believe is that if we can’t bring ourselves to do the thinks we know we must do to get out of this deep hole, then we are probably on an irrevocable path of decline at the expense of a rising China or a rising India. On the positive side of things, having traveled around the world, both in and out of uniform, talking to different leaders. People around the world are very much concerned about the fact that there is even a remote possibility that the United States could lessen its influence. They don’t want that.”

General Jones left the audience with one final thought. “This is not going to be easy. The problem that we are in is a Sputnik moment.  I am most absolutely confident that we can solve it,” said General Jones.

2012 Honorees Rear Admiral David Oliver Jr. of the U.S. Navy (retired) and General John H. Tilelli, Jr. of the U.S. Army (retired), finished out the program by accepting their Distinguished Service Awards, presented annually by the Fairfax Chambers of Commerce.