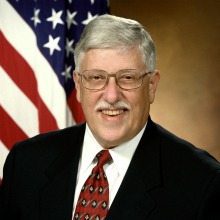 Money will be recognized for his years of dedication and service in the intelligence community at the Ritz Carlton in Tyson’s Corner, Virginia.

“His leadership, vision and unyielding commitment to excellence contributed immeasurably to advancements in the engineering realm of the industry,” said INSA Chairwoman Fran Townsend.

Money has worked in the intelligence and national security fields for over 45 years. His career has included posts in the Department of Defense, including Assistant Secretary of Defense for Command, Control, Communications and Intelligence and CIO  was also the Chief Information Officer.

Money left the Pentagon in 2001 to serve on several U.S. Government Advisory Boards and currently serves as Chairman of the NSA Advisory Board.