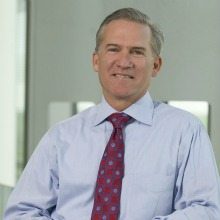 Lineberger spoke to WashingtonExec about his personal ties to leukemia and why the Leukemia & Lymphoma Society utilizes its funds the best when compared to other large nonprofits. Lineberger also announced new honors that will be awarded this year at the ball—recognizing Human Genome Sciences and the first ever James L. Eichberg Lifetime Achievement Award.

Robin Lineberger: My youngest brother is a two-time cancer survivor and so I got involved in supporting cancer causes as a result of my family connection to the broader disease of cancer. One of my career mentors, Dan Johnson, currently President of General Dynamics Information Technology, helped me connect with The Leukemia & Lymphoma Society (LLS). Dan has been a member of the Leukemia Ball Executive Committee for more than a decade and co-chaired the event in 2002 and 2003.
I was the protégé in helping to support the volunteers and raffle ticket sales and that sort of thing. Through that process, I’m happy to say that my contributions have matured into something more significant. It’s been a long support and learning period that has culminated in my being able to lead the end-to-end process this year.

WashingtonExec:  What are some duties you have as co-chair?

Robin Lineberger: The duties of the senior co-chair are really to lead goal setting and then working with the staff to establish the various subcommittees. The subcommittees are lined up along each of the major fundraising themes; which are major sponsorships, the Mercedes auto raffle, table sale activity, and the silent auction. Then we have the mission moment which also gives us the opportunity to raise money during the evening. It’s rather like a program management job where you first establish the goals, then establish the teams.

After the event in March we will take a pause, for spring break and beyond, and then as the late summer comes upon us the group will start convening with the new senior co-chair, Jim Davis, Executive Vice President of General Counsel and Secretary of Human Genome Sciences, and whomever the committee has selected as the new junior co-chair for the next year, which they announce at the Ball. The idea is to build a larger network of executives in the summer or early fall so when you move into the heavy fundraising sponsorships solicitation in the late fall through the winter and into the spring you’ve built a larger base to draw upon from the community so that we can continually replenish.

WashingtonExec: How much money do you expect to raise this year?

Robin Lineberger: We have a goal this year of trying to raise $3.1 million at this gala event to support research, patient and educational programs, and advocacy. LLS has invested more than $814 million in research since it began in 1949. In fiscal year 2011, LLS invested $76.7 million in research.

WashingtonExec: A lot of businesses have a lot of different options for giving back to the community.  Why do you think the Leukemia Ball should be on their list?

Robin Lineberger: I think first it should be on their list because of the large amount of the funds that actually are given to research. Nearly 80% of all of the funds that LLS raises goes directly toward the mission. It’s a very thin overhead structure so that’s beneficial. Secondly, the effectiveness of the dollar flow to the research, the effectiveness of the research itself and then the population that receives help. Leukemia is the number one cancer killer of kids under the age of 20 in the United States.

WashingtonExec:  What is your favorite part about the event itself?  Is there anything you are excited about this year?

Robin Lineberger: This year is the 25th Anniversary so it’s going to be a big celebration. The Titan of Business, which recognizes people who have done extraordinary contributions for LLS, will honor Human Genome Sciences. And this will be the first time that we are giving the James L. Eichberg Lifetime Achievement Award.  The Eichberg family has raised money on behalf of James Eichberg who was a long time significant contributor to LLS and this will be the inaugural award. The other big highlight of the night of course is the raffle of two Mercedes Benz automobiles.

WashingtonExec:  Those are all of my questions.  Is there anything else you would like to add about the event or The Leukemia & Lymphoma Society in general?

Robin Lineberger: There are over 1 million people living with blood cancer today. Every four minutes someone is diagnosed which means that there are more than 135,000 cases per year. Every 10 minutes someone dies from blood cancer – so that will be 54,000 deaths this year. When you asked me why should people get involved – these are some pretty stark statistics. It causes more deaths than any other cancer among children and young adults under the age of 20.
Some other highlights are LLS, over its life has invested more than $814 million in research since 1949 and in fiscal year 2011 LLS invested $76 million in research. It is really making significant contributions to the cure of these blood cancers.  A couple of statistics on the improvements – since 1974 the five year survival rate for children with the most common form of leukemia, just 53% of children survived and today it is 91%.  That is a big difference.  Similarly the survival rate for Hodgkin’s Lymphoma rose from 74% in 1975 to nearly 90% today.

To read Robin Lineberger’s thoughts on the federal IT industry duties click here.