You are at:Home»News»Q&A With D.P. Venkatesh Of mPortal: Creating Next Generation Smartphone Mobile Solutions 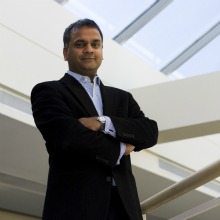 Venkatesh spoke with WashingtonExec about future trends in smartphone mobile technology, consumer vs. enterprise cybersecurity and how he was one of the first entrepreneurs to recognize the future potential of mobile.

WashingtonExec: What made you want to start mPortal?

D.P. Venkatesh: When I was working in Asia, a dozen years ago, especially in Hong Kong, I was dealing with a lot of the consumer electronics manufacturers and mobile operators. Back then, most of the work I did at McKinsey & Company and at CSC looked at big trends in the convergence of mobile phones, television and software from a mobile operator perspective as well as from a consumer perspective. It was clear to me that the next big growth industry was going to be mobile – not just providing mobile phones to a lot of people in both the developing and the developed worlds – but more specifically it was going to go beyond voice services to content delivery. I moved back to the U.S. and started mPortal in May of 2000.

WashingtonExec:  You said that you knew mobile was the next big thing. Did you predict smartphones would emerge ten years ago?

D.P. Venkatesh: When we started back in 2000, we went through a tough time in the marketplace for the first five or six years as mobile was seen as a very early stage opportunity. The main reason for this was, as you correctly pointed out, the technology wasn’t ready. At that time there were no smartphones and broadband was just happening in the wire line side and wasn’t thought of as a mobile solution. However, I fundamentally felt that it was just a matter of time before mobile technology would become the underlying technology as well as the underlying principle for businesses. The concept of accessing content from anywhere and on any device was something that I knew would happen.  Did I think I would be five years too early?  No, but like they say it is always better to be early to the game than to be late.

WashingtonExec:  Some say that technology runs in cycles of fifteen to twenty years. You started your company in 2000; where are we in the technology mobility cycle?

D.P. Venkatesh: I think there are multiple technology cycles at play and I think they overlap. We are in the early stages of the mobile industry when it comes to smartphone capability and network capability – meaning what they are actually able to do. But, we’re racing right along when it comes to development, with an increasing number of companies starting to make smartphones. We are certainly still in the early stages of what we’ll see with tablets, but they’re starting to develop features that show they will move past being smartphones on a larger scale.

Another thing at play right now, and an area where mPortal differentiates itself, is connected TVs. We all have heard the stats on how much time we spend in front of the television but, the television experience we know today is very passive or leaned back– you sit there on your couch and you watch TV. But as connected TVs develop, the TV experience will begin to mimic how we experience the web – you lean forward and interact.  What we really see happening when we talk about a connected TV experience is the ability for consumers to interact with their television not just to receive news and information but to also interact with the content – share it, customize it, delve deeper and the like. It’s a whole new industry that is just coming into its own and will continue to grow in the second half of 2012 and really take off in 2013 and 2014.

WashingtonExec:  I have heard other entrepreneurs say, “deliver technology first, worry about security second.” This is the opposite of what I hear from government executives. What are your thoughts on that?

D.P. Venkatesh: Our emphasis at mPortal always has been the user experience – it drives our business even more than the technology itself. Security plays right into that when our customers consider it a valuable part of the user experience. The reality is that very little data is encrypted. Everyone – public and private sector – should take basic precautions in terms of protecting their data such as wiping old devices. Depending on the vertical, there isn’t much difference when it comes to security needs, between public and private sector. For example financial data and defense data both need heightened security. The real difference in security level is seen when consumer apps are compared with enterprise apps. If I’m playing a game that sends reward data I’ve collected back to a server, do I need the same level of encryption as a message being sent from the Commander-in-Chief’s Blackberry?  Of course not. I think people need to take a step back and look at their application and what market it’s directed towards; from there it should be easier to determine the level of security that needs to be built in.

WashingtonExec:  I think your answer might change in a couple of years with people talking about biometrics and all of those security issues that will emerge as well.

D.P. Venkatesh: Of course, I mean today when you turn on your laptop, the security at best requires you to enter a screen name and password. Is that secure?  Kind-of – but it’s certainly not as secure as having somebody scan your retina in order to turn on the device the way they do for a missile silo in the Department of Defense. It’s also unbelievably more expensive to build a retina scanner into each and every device and not every device needs that level of security. Even as security measures continue to evolve, I think the economics will still be one of the main drivers and that’s more of a market by market determination.

WashingtonExec:  My next question is about SOLOMO; social, mobile, local. Could you describe to me how this pertains to your business and how you think this affects your industry?

D.P. Venkatesh: The concept of SOLOMO is that most people are looking for – who am I, where am I and what am I doing. Human beings by nature, as seen in the success of Facebook, like to share information, we like to believe we are a part of a network or a community or a village. Because of this, we’re seeing the social, mobile and local industries sort of converging because the consumer doesn’t look at them as three separate industries. At mPortal we focus on staying relevant in each of these three pillars by emphasizing the experience; what is the social element to it, what is the location element to it and then layering in the mobile or connected experience element to it.

WashingtonExec:  Do you have a favorite gadget or app?

D.P. Venkatesh: My personal favorite is a device called “Square,” a credit card reader. It allows me to plug a small piece of hardware into the top of my iPhone and then through an app, I can take credit card transactions.  Let’s say I bought something you want to pay me back for, I can just take your credit card and swipe it for any amount and it will go to the account I specify. They’ve essentially taken mobile payments and consumerized it. And, it is great for a small business. Square, to me, is a perfect example of innovation in SOLOMO – and it is a great experience.