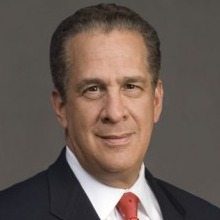 Ever wonder what your boss’s favorite football team is? Have you ever wanted to know what book inspires an executive of a public company?

WashingtonExec had the opportunity to ask Paul Cofoni, CEO of CACI, just that. In a short interview, Cofoni told WashingtonExec why he believes the Patriots still have a chance of winning the NFL Championship, the person who has inspired him the most throughout his career, as well as the book that impacted his outlook on life at the age of sixteen.

Cofoni also reflected on his previous role as Chairman of the American Heart Association (AHA) and how he thought 2011 Chairman, Linda Gooden, compared. “This year Linda Gooden over at Lockheed Martin beat me.  She said, ‘I had you as my target.  I knew I had to beat you.’  She did beat me,” said Cofoni.

WashingtonExec: What do you think makes CACI’s company culture unique?

Paul Cofoni: We’re agile; that makes us stand out.  Whether you look at us as a big little company or a little big company we’re quick on our feet like a small company but we have the reach back and capabilities of a large company.  That’s a very unique combination.

WashingtonExec: As we all know government contracting is an increasingly competitive space.  How do you plan on maintaining CACI’s growth while you see federal spending budget cuts?

Paul Cofoni: Government transformation is part of our business. When I think about the bigger problems I think about cyber and the fact that there are literally hundreds of thousands of attacks a day on our nation from either nation states or rogue cyber terrorists or cyber criminals. Another area is intelligence, surveillance and reconnaissance. We make sure that our war fighters have the best technology available in the form of fused intelligence at their fingertips to be able to detect not only the presence but the intentions of any adversaries here or at war.

WashingtonExec: What is your favorite book or what is the last book you read?

Paul Cofoni: My favorite book, which inspired me early in my life, is Profiles in Courage, written by John Kennedy. In one little book he summarized a lot of important things about personal courage and life. It’s been my favorite since I was probably sixteen years old. Out of all the presidents we’ve had, he was the best at getting the American people aligned on important objectives, whether it be the Peace Corps or Mission to the Moon.

WashingtonExec:  That goes into my next question, who inspires you?

Paul Cofoni: President Kennedy was an early inspiration. Today, the people who inspire me the most are the war fighters that we see coming back from combat, many of whom are wounded terribly both physically and psychologically, and yet they have the courage to find a new life for themselves. These young volunteer war fighters are just amazing people.

WashingtonExec: I have heard that you are a big Patriots fan.

The only Super Bowl that I’ve ever gone to was Phoenix 2007 when the Patriots played the Giants and lost.  That was the year they had nearly a perfect season. My son and I went to bed crying that night.

WashingtonExec: Do you think they are going to win this year?

WashingtonExec: I read that you are the former Chairman of the American Heart Association.  Are you still involved with AHA? How do you think the 2011 Chairman, Linda Gooden, fared?

Paul Cofoni: This year our employees raised $40,000 for the American Heart Association.  We are quite proud of that.  The year I was Chairman I think the whole campaign raised $1.8 million.  This year Linda Gooden over at Lockheed Martin beat me.  She said, “I had you as my target.  I knew I had to beat you.”  She did beat me.  She raised close to $2 million for the American Heart Association. When I was Chairman I talked her into being the Chairman. She is a very avid Heart Walker.