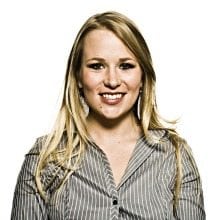 Meet Leslie Bradshaw, president and COO of JESS3, a creative interactive agency based in Washington D.C. area that specializes in branding, social media marketing, web design, infographics and data visualization. Bradshaw discussed with WashingtonExec the goals of data visualization, her determination to work for pro bono causes and the primary difference between working for JESS3 and a vineyard.

Being one of Washingtonian’s Tech Titans of 2011, Bradshaw has helped an astronaut check into FourSquare from space and worked with clients such as Nike, Facebook and Wikipedia. She works alongside co-founder of JESS3 Jesse Thomas and credits her success to her age, curiosity in school and the hardworking team at JESS3.

WashingtonExec: Fast Company named you one of the Most Influential Women in Technology. How has your background led you to this point in your career?

Leslie Bradshaw: The first thing that needs to be recognized about JESS3’s success is that it’s always been a team effort. I’m a more of a strategist and businesswoman in the technology industry (vs. a pure technologist). Thus, I would not have the recognition for leading and strategizing successfully without the amazing JESS3 team executing hard and pushing the limits with excellence, purpose and creativity in all that we do. The JESS3 team is composed of some of the most inspiring, smart and hard-working people I’ve ever met. It’s their diligence and talent that reinforces my position in technology circles as one of leadership and influence.

Another reason I believe I’ve received this recognition is because of the proclivity I had early on for math, science and economics. Curiosity in and success with these subjects at an early age gave me the confidence and practical skills that inspired me to pursue a career in the technology industry. In addition to my school work, my mom enrolled me in camps for girls focused on math and science — a rare experience for women, who are severely underrepresented in those fields. I also attended coed camps for leadership (through OASC) and for economics at the women’s college Bryn Mawr. Sessions at those camps allowed me the opportunity to develop skills in the hard sciences in a competitive, often times all-female, and advanced setting.

The final thing that comes to mind that has made me a successful leader in the technology industry is that I am a millennial and a digital native. Early on in my career, I was working amid an older generation often intimidated by technological devices, software and platforms. Hesitation by some opened up leadership opportunities which I seized, allowing me to leap-frog people more senior than me.

Leslie Bradshaw: Though my early experience with hard sciences bolstered my ability to work in technology, that’s not to say that social sciences don’t also play a role in my success. A lot of what I do is working with people, and that work is very much informed by my classics-driven education at the University of Chicago. There, I was a Phi Beta Kappa graduate with an artium baccalaureu (BA) degree in gender studies, economics and anthropology (and my language was Latin). My coursework and thesis required understanding people’s motivations and behaviors through a variety of lenses. As a social scientist, you realize that people make decisions based on historical, gender, cultural, economical and psychological influences. Using an interdisciplinary lens allows me to be cognizant of these influences, which enables me to bring the right approach to personal and professional dealings.

WashingtonExec: What is the main goal of data visualization?

Leslie Bradshaw: Data visualization makes information accessible, visually engaging and provides the viewer with context. There is a balance that needs to be achieved: too visual or playful and it can threaten the integrity of the information; too data-centric and it can confuse or alienate people. At JESS3, we like to think we get it right more times than not.

WashingtonExec: Who or what determines what issues JESS3 takes on for pro bono causes? Is there a particular cause that you are strongly committed to?

Leslie Bradshaw: There are three levels of evaluation for us:

* There is an acute issue with a great need. For instance, during the BP-Deepwater Horizon oil spill last year, we released a plug-in that coated key text on a user’s browser, like the words “BP” and “oil,” in a black, dripping film. The oil spill was on everyone’s minds and we wanted to leverage our skills to help drive funds to the organizations leading the cleanup. We participated with “digital activism” by providing folks a way to visualize their frustrations.
* People approach us and there is a shared passion. An example of this was with CauseShift, who approached us with information correlating obesity and poverty in the United States. We were excited to help them visualize that data, producing an infographic illustrating this correlation.
* We are personally passionate about an issue. We also select issues that motivate us personally. Those tend to be women’s rights, gay rights and human rights. We teamed up with Amnesty International in celebration of their 50th anniversary last month, and released a suite of five infographics dedicated to the Nobel Prize-winning organization’s key issues, including the death penalty, maternal health and extraordinary renditions. Those visualizations were a huge hit, earning tens of thousands of viewers, and increasing Amnesty’s following on Twitter by almost 3,600 in just one week. We are also gearing up to visualize the State of Sex Trafficking, working closely with my sister Jennifer Bradshaw who is spearheading the research for the project.

WashingtonExec: How is being a partner in a family business (Bradshaw Vineyards) different from being a co-founder in your own company (JESS3)?

Leslie Bradshaw: The difference is much more between a vineyard and a digital agency, than it is between who runs them. JESS3 is very fast-paced and always on the bleeding edge of technology and design, whereas running the vineyard requires long-term attention to laborious and best practice processes. Both are family businesses, though.

I’ve been in on the ground floor of both Bradshaw Vineyards and JESS3. Our family is coming up on 18 years of running the vineyard, and while I really didn’t enjoy sacrificing weekends with friends to work the land when I was younger, it’s increasingly meant more to me as I’ve gotten older. As for JESS3, when I joined my partner in all things, Jesse Thomas, as a co-founder in 2006 it was just him and me working hard and trying to make something out of our complimentary talents. In both businesses, it’s been launched and run by family, I’ve always been willing to lend my talents at lower-than-market rates and laboring beside those I love continues to be one of the best parts of the work.

WashingtonExec:  What is something about you that people don’t know?

Leslie Bradshaw: One thing many folks don’t know is that I was really into crystals, beads and whittling as a kid. I was born in Carson City, Nevada and one of the allures of the area is its wealth of crystals, which I would pair with beads and make into necklaces (or pair with wood and make sheaths for my miniature swords). My first business was actually creating and selling these beaded crafts with my mother. We kept that going for 15 years, giving me a great introduction to managing my time and answering clients’ needs.