Marissa Mayer on Google Mobile Milestone and Future of Geo 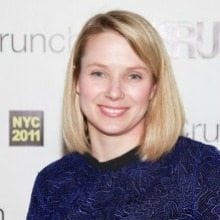 In an interview with Michael Arrington at TechCrunch Disprupt in New York City, Google’s Marissa Mayer tried to clarify Google’s geo priorities, her focus for the next two years and a milestone for Google Maps with Michael Arrington.  Mayer joined Google in 1999 as their first female engineer, she is currently the Vice President of Location and Local Services.

Mayer announced that Google Maps for mobile has now surpassed 200 million active user installs and shared that mobile constitutes over 40 percent of all Maps usage. She expects mobile will surpass the desktop version of Maps in June.

Folding Hotpot into Places is one example of Google working to streamline their numerous, often confusing products.  Places has recently been upgraded in an effort to become the de facto directory for local business on the web.  Mayer noted that about 20 percent of the searches on Google are now for local information, for mobile the number is nearer to 40 percent.

As Google’s head of Geo (which includes both Maps and Local), Mayer is clearly proud of these stats as she  talked about the potential for further development in the customized offerings Geo hopes to offer in the next two years that she described as contextual discovery.   “Can we do a search without someone doing a search?” she asked. “From your context, where you’ve been, what you’ve been doing, can we give you just the right piece of information? […] Can we tell you if you walk into a restaurant where a friend was last week what they ordered so you can figure out if you should order it?”

Asked about the mood at Google, Mayer was upbeat.  “It’s really optimistic. There’s always been a lot of energy,” she said. “I always joke that Google’s a really twitchy place.”

Backstage an interviewer complained about Google Maps’ lackluster performance in New York city (mainly due to the tall buildings).  Mayer explaining that the more information you share with Google, the more intelligent it becomes.   She was optimistic that with hotspot triangulation and increased usage, Google will be better able to pinpoint users in the city.  She explained that when you Check In to a business using Latitude, Maps will better know where you are and be better able to help you find your next destination.