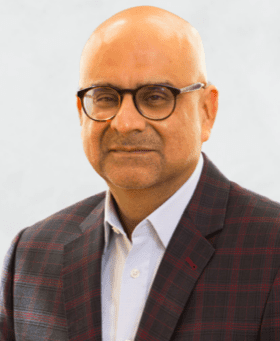 Deepak Hathiramani spent three decades in a successful technology career, building startups and relationships that would last a lifetime. Now, he’s following a different path, but one to which he is enthusiastically devoted: real estate.

For Hathiramani, a commitment to unquestionable integrity and ethics, transparency and a partner with a shared vision all came together in the form of SteeleHarbour Capital Partners, a real estate investment firm he launched with Chris McGrew in January 2019.

“SteeleHarbour is focused on middle‑market strategic equity, preferred equity and debt investments with a primary focus on multifamily and office real estate in high-growth markets in the Southeast and Mid‑Atlantic United States,” he said.

“Many have been lulled into complacency by a period of extended economic expansion, but post-COVID-19, based on our experience successfully navigating through previous downturns, we remain disciplined in our investment approach and strategy,” he said. “Real estate is largely a function of being positioned to weather the storms, and while in recovery mode, be poised and prepared to take advantage of opportunities. SteeleHarbour is well positioned on both fronts.”

Hathiramani’s earlier career experiences continue to shape and inform his current work. Born in Nigeria and educated in India, he embraced the possibility of his dreams and came to the U.S. in 1983 to pursue a degree in computer science at the University of Texas in Austin.

Technology, he said, was his first passion, culminating in the 1990 founding, growth and eventual acquisition of Vistronix in August 2016. The national security solutions company was a leading middle-market provider of cyber, data analytics, cloud computing and geospatial systems and solutions to the intelligence community, the Defense Department and multiple federal civilian agencies.

Hathiramani, however, could not deny the voice inside him that called for something more.

“Once I satisfied that passion, I had the burning desire to follow my other passion — real estate,” he said. “Being a new domain, it was important that I understand the fundamentals, and that’s the reason I decided to go back to school.”

“One always has more to learn, and in spite of being the oldest student in class, going back to school was a wonderful experience — especially when you don’t have to,” he said.

Graduating a year and a half later from George Washington University, Hathiramani spent the next 12-18 months studying the markets and realized three things very quickly.

“One is I know enough to be dangerous, second is it’s a very relationship-based business, and (third) the best deals never come to the market,” he said.

With that perspective, Hathiramani began searching for a partner whose integrity and ethics aligned with his, who had a long-term vision, and who was, in Hathiramani’s view, “smarter than I.” He was introduced to McGrew through a common colleague in the real estate business and after a year-long conversation and planning, he and McGrew decided to form SteeleHarbour together.

At this stage of his career, he has some great memories on which to reflect.

“Building and scaling Vistronix — through its ups and downs — was a tremendous experience that would not have been possible without my colleagues who were instrumental in our growth, and I am honored to count on them as friends even today,” Hathiramani said.

From his time at Vistronix and earlier, Hathiramani carries some vital lessons that stand the test of time.

“Integrity is absolutely critical, and your ability to treat people with respect is fundamental to your character and to your leadership traits,” Hathiramani said. “As Warren Buffet always emphasizes, look for three things in a person: intelligence, energy and integrity. If they don’t have the last one, don’t even bother with the first two.”

The second lesson is to surround yourself with people smarter than you and create a culture where the best idea wins, Hathiramani said.

“Endeavors succeed or fail because of the people involved,” he added. “Only by attracting the best people will one accomplish great deeds.”

Another lesson he internalized at Vistronix and continues to apply today is the importance of lending a hand and helping others grow both personally and professionally.

“Your team members will only care when they realize that you care,” he said. “It’s extremely important not only for you but for the people you work with to have and maintain some level of work-life balance and that one takes the time to enjoy the important things in life. Your quality of life is directly proportional to the least happy member of your family.”

A self-described workaholic, Hathiramani is being more intentional these days about finding work-life balance and spending more time with his family. He and his wife Hansa have three grown boys — Vishal, Sahar and Sabir. He also enjoys reading and enlarging his collection of fountain pens. Hathiramani has had a passion for pens since childhood and still enjoys collecting them.

Going forward, one goal outside of his work with SteeleHarbour is to continue giving back to the community in meaningful ways.

“Years from now, the world may be different because you were important in the life of a spouse, child, parent or a colleague,” Hathiramani said.

Besides serving on the advisory boards of Blue Delta Capital Partners and several government contractors, he is a member of George Mason University’s Volgenau School of Engineering Advisory Board, the University of Texas at Austin Department of Computer Science Advisory Council and the Northern Virginia Technology Council Senior Advisory Board. He also mentors several upcoming entrepreneurs in the government contracting space and is active in work supporting underprivileged children through involvement in a number of organizations in India and the U.S.

“It is never too late to become the person you dream of becoming,” Hathiramani said.

Deepak Hathiramani SteeleHarbour Capital Partners Where are they now