You are at:Home»News»An AI Tool Detected Health Anomalies in Wuhan Before the Pandemic. Now It Helps Detect and Track its Spread Worldwide.

When Geospark Analytics’ artificial intelligence-driven platform detected abnormalities around pneumonia data in Wuhan, China, on Dec.31, the tool immediately triggered a hotspot to monitor the outbreak and alert users. Little did Geospark or its users know they’d be tracking an upcoming pandemic in its early days.

The Herndon, Virginia-based venture-backed startup developed its core product Hyperion four years ago. It automates global threat and risk assessments driven by publicly available information, including news, social media, economic and national disaster information, and weather data. It pulls from 6.8 million global and local sources of information, daily analyzing over 80,000 articles and 30,000 social media posts and detecting 8,000 events. The platform then looks for abnormalities in those data feeds. 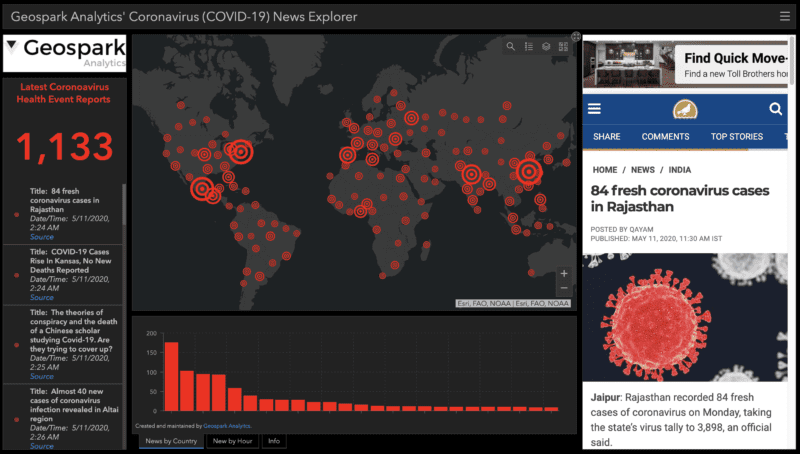 “For every country in the world — about 1,100 cities and more than 8,000 regions around the world — we cover the entire global world land mass,” Chief Operating Officer John Goolgasian told WashingtonExec.

Geospark Analytics uses all the information it gathers to create eight deep-learning models around the data, and some advanced statistics to look at activity assessments and AI-driven stability modeling around the world.

The anomalous health activity in Wuhan was discovered by the company’s Hyperion platform and categorized as a disease outbreak just days before the World Health Organization reported on social media there was a cluster of pneumonia cases in that area.

Hyperion users all over the world were then alerted through the automated alerts and curated reports sent out each morning that Hyperion’s health model detected an outbreak.

The situation was flagged as a Health Hotspot in China, allowing users to monitor developments in the spread as the situation unfolded.

“We weren’t saying that it was going to turn into what it ended up being, but the system understood that there was this weird anomaly in Wuhan around health,” Goolgasian said.

Geospark Analytics then modified its health event model and focused it just around identifying the coronavirus information around the world, primarily news sources, to create a COVID-19 specific model. 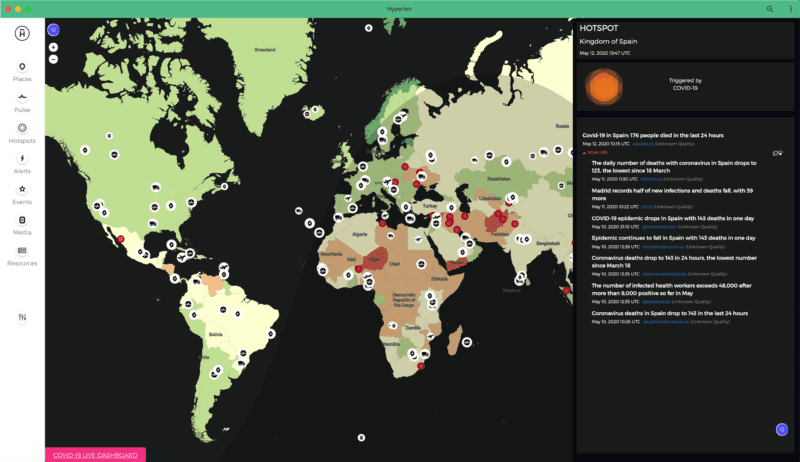 “It was a great way to track where COVID-19 was spreading and where things were happening because we geo-position everything, we try to identify where they’re talking about,” Goolgasian added.

And that model has since been made public, enabling anyone to access both the dashboard data and an interactive map interface showcasing the data by location.

“We were trying to get the information out as broadly as possible for response and recovery efforts,” Goolgasian said.

The platform’s AI capabilities have since dove into the spread of the pandemic, analyzing where cases currently are, where they are projected to be, and even a U.S. county’s ability to absorb the impact of potential hospitalization.

Evolution of the Core Engine

Hyperion doesn’t just detect and track. It also gets information from country, regional and city levels to assess geopolitical, sociopolitical and economic stability anywhere in the world.

“We recalculate stability every hour based on what’s happening over that area. Really looking at the events that are happening in news and social media and economics and natural disasters and weather and looking for micro changes in stability that could be leading indicators of disruption,” Goolgasian said.

Hyperion does this mathematically and is augmenting human analysis of political and geopolitical risk for Geospark Analytics clients. 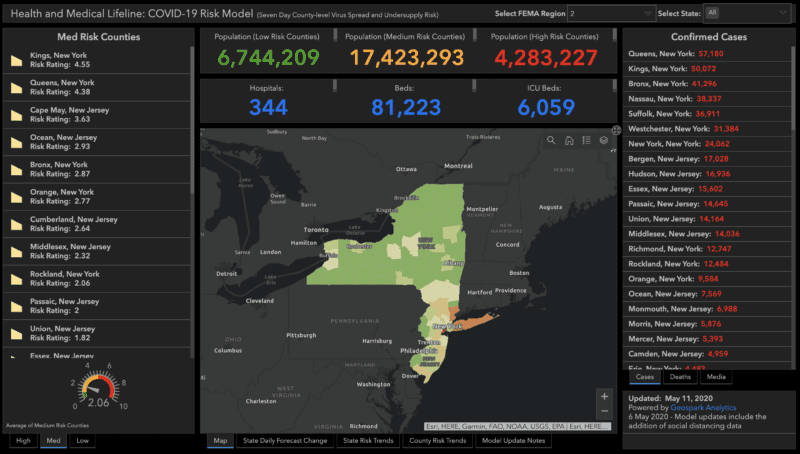 Geospark Analytics is also working with federal customers to pivot its AI engine to dive deeper into the spread of the pandemic in the U.S. The core engine is now assessing the impact of the virus on every county in the U.S.

The Geospark team built a multicare approach that tracks the number of cases, deaths and recoveries in each area, the epidemiological spread and where cases are projected to spread. The system is also tracking existing hospital infrastructure and demographics in those counties to produce a seven-day forecast of where the virus will spread, and what those counties’ abilities are to absorb the impact of potential hospitalization in hospital and ICU beds.

After monitoring the spread in the U.S. and the hospitalization grade, Geospark produced a risk value for every county in the country from 0-10, determining the risk in seven days for those counties’ ability to handle the spread of the virus.

“Not just where it’s spreading but can those counties and the existing health system absorb that spread,” Goolgasian explained.

And all Hyperion clients have access to this, including the Federal Emergency Management Agency, U.S. Northern Command and several other government and commercial customers.

For example, when the U.S. surgeon general announced March 29 Indianapolis would be an emerging hotspot for COVID-19, Hyperion had already flagged the city as a problem area in its seven-day forecast.

“We’re getting anecdotes back from clients where they’re seeing things come about that we’ve already said would potentially happen,” Goolgasian said.

And if Geospark Analytics can find the right data sources, it hopes to be able to expand its capabilities of predicting and detecting high-risk areas in other countries, too, to help with COVID-19 relief response efforts globally.

Hyperion provides a unique capability for organizations under max telework policies, too. Some customers have employees working from home unable to access the type of data and systems they normally do in the office.

“They’ve had to decentralize their operations and they’re trying to figure out, ‘how do I keep on top of what’s going on around the world?’” Goolgasian said.

But because Hyperion is a web-based platform, it can be accessed from anywhere. “You can keep track of everything that’s going on around the world,” Goolgasian added. 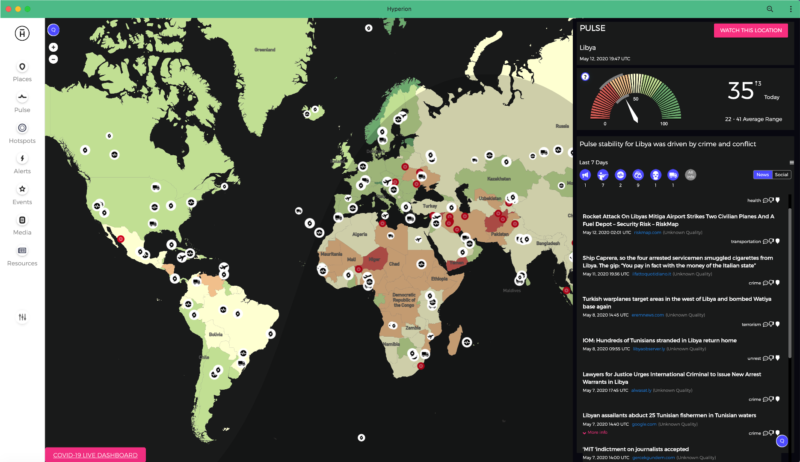 This capability is referred to as the virtual operations center. It allows organizations to maintain their mission as they shift from centralized to decentralized operations.

In a blog post, Goolgasian recounts a recent email he received from a client running a secure operations center and needing help setting up their team with global situational awareness tools at home.

“The power of SaaS-based tools, like what we have built with the Hyperion global threat and risk assessment platform, is they can go anywhere your team goes,” Goolgasian wrote.

So, he told his client the organization already has a mobile global security operations center, as the team can access the Hyperion platform from home. And like other virtual collaboration platforms, Hyperion allows users to easily share information between existing capabilities or share screens with team members as they are writing reports or issuing warnings.

“What we have created is a tool that really helps automate these risk assessments and then integrate those with those existing tools,” Goolgasian said.

Geospark Analytics opened its API that drives the data and machine learning models and analytics behind Hyperion for integration into other applications. That’s how it developed the COVID-19 dashboard and interactive map that is available to the public — by plugging the data and analysis Hyperion’s health model produced though its API into ESRI’s ArcGIS Online, a cloud-based geographic information system mapping software.

And the commercialization aspect is significant. Whatever components, capabilities or models Geospark Analytics builds on top of its Hyperion platform — around air safety and security for the Air Force, for example — it can commercialize across sectors in the U.S. or overseas.

“There’s a pretty broad spectrum of the applicability of this,” Goolgasian said.

The true value behind Hyperion’s current capability during the COVID-19 pandemic is to help stem the tide, save lives and provide government and industry with actionable insight for response efforts, Goolgasian said.

Rather than replicating what other data-tracking platforms are doing, Geospark Analytics found a gap in modeling how counties, states and maybe eventually different countries were equipped to absorb the pandemic’s impact. This way, organizations can make informed, data-driven decisions on how to allocate resources and operational support.

“What we really developed this for is a tool that both commercial and government organizations can use to say, ‘here’s areas not only where the pandemic is spreading but the areas that are most in need because they can’t handle the spread or they can handle in the future,’” Goolgasian said.

Hyperion wasn’t necessarily designed for COVID-19 or to track disease, but it is tailor made and adaptable to address and detect these types of large-scale global issues. In fact, the health model was originally created at the beginning of 2019.

“It’s not a static model, and Hyperion in general is not a static system. It is very modular. It is very flexible,” Goolgasian said. “We built this backend and this big data-gathering capability to be able to answer different questions.”

Because the health event model already existed within the platform, Geospark Analytics was able to quickly tune the engine toward COVID-19. Geospark Analytics released the first health model for COVID-19 tracking in 48 hours, which has since been refined to be more accurate and useful. In the last 60 days the model has been accessed over two million times.

But getting the technology to that point took some time.

And Geospark Analytics is pivoting almost immediately to the next problem to be solved: how to safely reopen America’s cities, counties, states and military installations at home and abroad while considering a potential second wave of the virus in the fall.

Geospark Analytics’ global situational awareness and Hyperion’s alerts around key events like health, travel and transportation security are critical data as corporations plan for a return to work, as Americans contemplate traveling and as the government doubles down on how to protect its critical assets and supply chains.