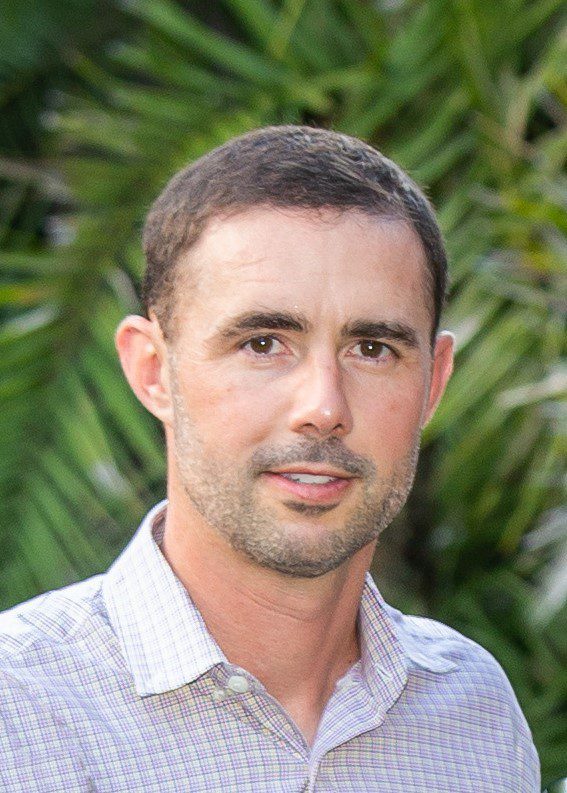 Devin Talbott was 35 years old when he took an entrepreneurial leap based on an interest he discovered in college, and in just eight years, grew his business nearly five-fold while remaining engaged in matters outside of work that are important to him.

Talbott is the founder and managing partner of Enlightenment Capital, a private investment firm that provides flexible capital solutions and strategic support to middle-market businesses in the aerospace, defense and government sectors.

But before he became an investor, Talbott was interested in humanities. The Washington, D.C., native attended Amherst College in Massachusetts, where he played varsity soccer and dual-majored in Spanish, and law, jurisprudence and social thought.

“It was basically a poly sci, but focused on how political theory and social theory played out in famous court cases. It was pretty interesting,” Talbott told WashingtonExec in an interview. “I thought as I made my way through college, I might end up being a lawyer.”

His undergraduate years were also defined by soccer. Talbott was on the college’s varsity team, which he helped lead to the Final Four of the NCAA tournament as a senior.

“Soccer had always been a huge part of me growing up and then through high school . . . part of the reason I went to a smaller school was to be able to continue playing soccer while still focusing on other interests,” he said. “Being a student athlete was important to me and helped kind of shape me during college.”

And because he self-defines as “type A” and enjoys being involved, Talbott also wrote for the school’s political journal and was a part of the student government for a year.

“I had a pretty full schedule,” he said.

Talbott graduated from Amherst in 1998, and while many of his friends were getting into investment banking in New York and San Francisco, he decided to buck that trend.

He got into Georgetown Law but deferred for a year to live in Barcelona, Spain, with a soccer buddy.

“Because of soccer and Spanish and knowing it was an international cosmopolitan city, we thought Barcelona would be a fun year to just immerse ourselves in a foreign culture,” Talbott said. “We just went with nothing but a one-way ticket and a hostel reservation.”

Talbott felt comfortable taking a year for self-exploration knowing he could always attend law school when he returned. So, with an open mind and good attitude, he adapted and immersed himself into a foreign country for a year as much as he could, especially in a pre-iPhone, dial-up internet era.

When Talbott returned to the U.S. a year later, he did start law school — but quickly realized he didn’t want to be a lawyer after all. And during a time when business and tech was taking off, he decided to simultaneously pursue a Master of Business Administration.

“I ended up doing four years to do two degrees,” Talbott said.

He received both his law degree and MBA by 2003. He took and passed the New York bar exam, too, not to pursue but “just for culmination and achievement around what had been law school,” Talbott explained.

He spent those four years of graduate studies also figuring out what exactly he wanted to do. He worked at a public defender’s office for a year, and at a white-shoe law firm. But it wasn’t until he came to investment firm The Carlyle Group he really found what he was interested in. He worked there part time as an associate from September 2001–April 2003.

“I liked the transaction side,” Talbott said. “That was a job I had during graduate school that kind of tuned me into the potential of being a deal guy.”

The Carlyle Group made Talbott interested in becoming an investor, but Talbott knew investment banking was the preliminary “bootcamp” — the hard training and modeling of obtaining transaction experience.

So, he went to New York in 2003 to work as an associate for Lazard, a large investment bank.

“I was grinding it out, working seven days a week. At one point, I was regularly working 80- to 100-hour weeks doing the M&A investment banking grind,” Talbott said.

And at that time, he had just gotten married, and his wife was getting her MBA at Yale.

“She was in New Haven during the week and I was working these ridiculous hours. So even though we just got married, we didn’t see each other very much, so it was hard work,” Talbott said.

Eventually, Talbott wanted something different. He got wind that former Defense Secretary William Cohen was looking to start a private equity and defense and government services merchant banking arm tied to his consulting practice, The Cohen Group. The new unit would be called The Cohen Group Financial Partners, and Talbott ended up leaving Lazard to help start the new financial investment arm.

“It was pretty hard,” Talbott admitted. “It was like my second postgraduate school job, and I was doing deals in the defense space.”

He was with The Cohen Group from 2005–2006 as a senior associate, getting his start in the defense and government markets.

In June 2006, Talbott left to join D. E. Shaw & Co., one of the largest hedge funds in the world. The firm was looking to add new private equity-like strategies and open an office in Washington, D.C., and Talbott and his wife were ready to move out of New York. So, he returned to D.C. to help start the D.E. Shaw office in the District.

Talbott was focused on the defense and government side of investment banking, which proved to be a fitting market. Having grown up in the nation’s capital, he was always interested in politics and geopolitics.

“What the people are doing ultimately ties to national security and government infrastructure, which I found really interesting,” Talbott said.

Plus, as he was building his network as a “mid-level deal guy,” finding interesting deals and bringing in those investment opportunities, he was meeting executives and companies that happened to be in the defense and government sector.

And with D.E. Shaw & Co., Talbott was developing a specialization within a specialization, meaning he was doing private credit and debt-equity deals in a highly specialized industry.

Talbott eventually became vice president at D.E. Shaw & Co. by the time he left in January 2012. Then, it was time to start his own venture.

“I worked in big firms, and I would say, I’m a decent employee, but not a great employee, and so I always had the sense that being an entrepreneur and being my own boss was really interesting and compelling,” Talbott said. “And my track record at D.E. Shaw over about six years was pretty strong.”

And as he developed a niche within a niche in an uncrowded D.C. market, being a flexible capital provider for defense and aerospace in D.C. made sense.

“As I had a number of business mentors and friends who, as I talked about the theory — it was just theory at that point — encouraged me and said, ‘Yeah, we’d invest with you and yeah, you should go for it’,” Talbott said. And thanks to mentors, backers and counselors, he had the encouragement and push he needed to actually start Enlightenment Capital.

But starting a private investment firm didn’t come without its challenges.

In 2012, Talbott was 35, and fundraising for a first fund was brutal. He spent a little over that inaugural year at conferences, accepting speaking engagements on innovative investment strategies, and essentially, “dialing for dollars.”

“I was working from a coffee shop most of the time helping to put a website up, helping generate some buzz about our strategy,” Talbott said, “doing everything I could to create the building blocks of a business so I could generate deal flow and slowly raise capital.”

Talbott would raise capital, then do a deal, raise more capital and do another deal and so on. “It was a bit of a juggling act,” he said. That’s because when trying to raise money as a first-time fund, 99% of people won’t “touch you or even talk to you,” as Talbott explained, and of the other 1% that will, only half will likely invest.

“The irony of course is when you get bigger to a place where we are now, everybody wants to help you raise your next fund and you don’t need the help anymore,” Talbott added.

Today, Enlightenment Capital’s business is about five times what it was in 2012, and it closed its most recent third fund and added a new small business investment company (SBIC) fund to focus on smaller companies.

And while he’s succeeded in his career as a transaction investment professional, networker and relationship builder, leading was something Talbott had to learn along the way.

“The leadership piece I’ve had to develop on the fly,” Talbot said. “So that’s something I’m constantly re-evaluating, learning, watching what works with other people.”

But also having valuable people on board means they don’t need much leadership, Talbott added, just the room to do what they already do well.

“There is a mutually reinforcing dynamic that if you get a bunch of good folks together and everybody focuses on what they’re good at, you’re able to build something,” he said.

“Central to our model is partnering with executives who are both good business people and good people who have built interesting companies, and we’re coming in at a critical time to help kind of turbocharge the next chapter,” Talbott said.

“As I’ve learned more about the industry and the mission and the military, it’s been interesting for me to kind of rediscover and learn about the sacrifice in the service of earlier Talbotts,” he said.

And after a year of success and closed deals, $450 million of fresh capital and new offices, Enlightenment Capital is looking to investment and continue building rewarding partnerships with founders and CEOs — but remain personal, agile and entrepreneurial.

“We are in deployment and growth mode,” Talbott said.

Putting Soccer and Passion to Use 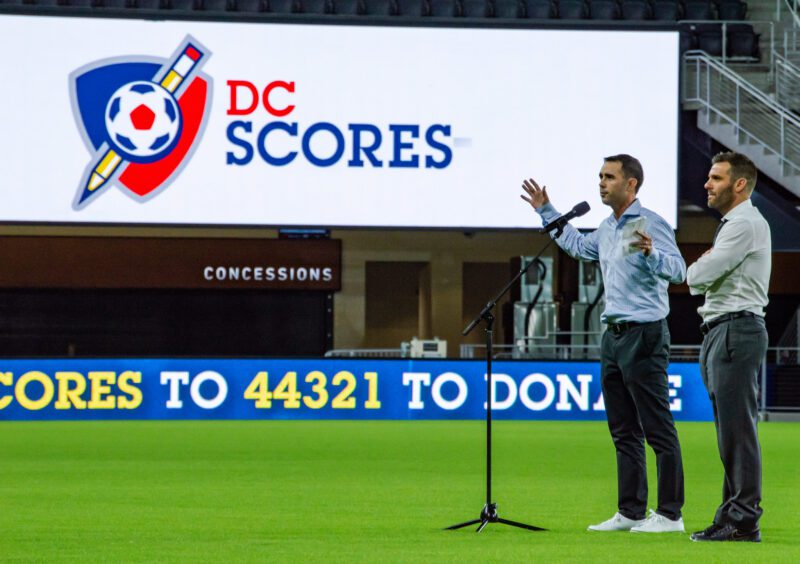 Devin Talbott is a big supporter of DC SCORES

Outside of work, soccer has always played an important part in Talbott’s life. While he doesn’t play anymore, all three of his children do. He is also on the board of an organization that uses soccer to improve the lives of kids across DC.

Talbott is a big supporter of DC SCORES, an organization that builds teams and soccer leagues for over 3,000 elementary and middle schoolers in Washington, D.C.

“They provide the structure, motivation, coaching, sense of victory and defeat, which is all a learning experience for kids that might not otherwise be able to have those experiences that I certainly benefited from,” Talbott said. “It’s a really powerful organization.” 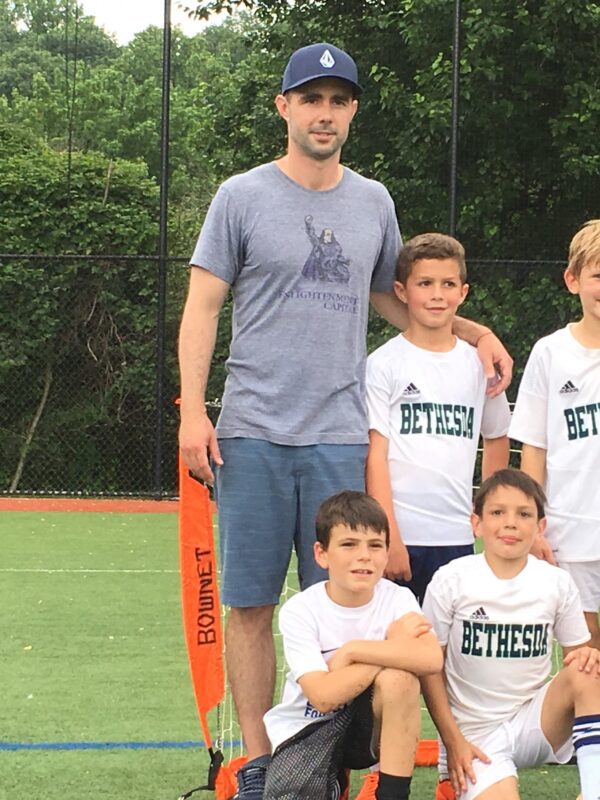 And Talbott helps lead DC SCORES’ annual fundraising event at Audi Field called One Night, One Goal with the head coach of the D.C. United soccer team, Ben Olsen. Many of Talbott’s portfolio companies sponsor the event, and the field fills with kids and supporters. There’s a poetry stage, penalty kicking event, live auction and a slew of local celebrities. Last year, the event raised more than $400,000, and Talbott looks forward to continuing to be a part of it.

But as far as playing soccer, those days are over for Talbott. Instead, he has run marathons and mini-triathlons, and accomplished his goal of running a marathon under 4 hours at age 39. Now, he helps train his three kids in soccer; an 8-year-old girl, a 10-year-old boy and a 12-year-old girl. Even his wife has “finally yielded” and become a soccer head, so Talbott’s days are full of work, being home and being on the soccer field.