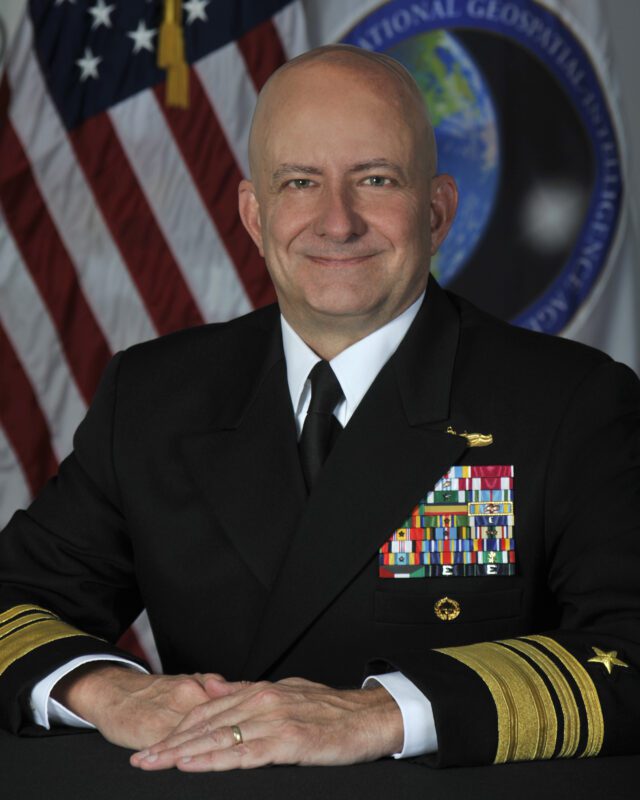 Vice Adm. Robert Sharp became the National Geospatial-Intelligence Agency’s seventh director in February 2019, and leads the agency under the authorities of the secretary of defense and the director of national intelligence.

And as a life-time sailor with more than 30 years in the Navy, he’s learned the path to success is through people and partnerships.

“As someone who’s relied on [geospatial intelligence]every day of my career, it’s a tremendous honor and privilege for me to be serving as NGA’s seventh director,” Sharp said.

On the day he became NGA director, Sharp promised the employees three things: to work hard each day to earn and maintain their trust; to fight for the resources they need to do the things the nation needs them to do; and to remove barriers preventing them from being successful.

And since, he’s focused his leadership on “people first.”

“Our mission is to provide timely and relevant geospatial intelligence to a wide range of customers, from policy makers to warfighters to first responders — a job we continue to improve upon every day through the strength of our people and our partnerships,” Sharp said.

NGA exists to combine a detailed knowledge of the physical Earth with an understanding of the world to observe what’s happening where. And to do so under Sharp’s lead, the agency’s No. 1 priority is investing in its people.

“They are the basis of our strength,” Sharp said.

Since he stepped into director role, Sharp has focused on creating an environment where people want to stay on the team, where they are properly resourced, their families are taken care of and there are conditions for people to contribute, grow and succeed.

“Coming to the close of my first year, I have a strong sense that team NGA has cultivated that environment and that the workforce has embraced our strategic goals and core values,” Sharp said.

And while he can’t discuss all of his team’s accomplishes in 2019 because of the nature of the work, Sharp says he’s proud of the workforce.

One significant achievement he can talk about is the World Magnetic Model update. Recently, NGA in partnership with the National Oceanic and Atmospheric Administration and the British Geological Survey released the World Magnetic Model 2020 update, providing essential navigational data for all military and civilian planes, ships, submarines and GPS units that operate around the clock and around the globe.

And on Nov. 26, NGA broke ground on its future west headquarters in St. Louis, Missouri, beginning a new chapter for the agency.

Many of the advances of NGA’s federal missions have come through its artificial intelligence, automation and augmentation efforts, or what the agency calls AAA.

For example, NGA coordinated with the intelligence community and the United States Geological Survey — the lead federal agency for wild land fire management — to develop a new automated capability for the wildfire-fighting community.

Because of this coordination and cooperation, as of April 1, the beginning of the California wildfire season, the wildfire-fighting community can now conduct anticipatory analysis of destructive and fast-moving wildfires.

And going into 2020, AAA continues to be a focus area.

“Our goal is to partner with machines so that we can make best use of the exponential growth in volume and source of data, letting machines do what machines do well and analysts do what analysts do even better — think critically and solve problems,” Sharp said. “This will allow us to provide critical intelligence faster, more accurately and with precision — all necessary to be better than our competitors.”

NGA will also continue investing in its people and strengthening and expanding its partnerships across the full spectrum of GEOINT missions.