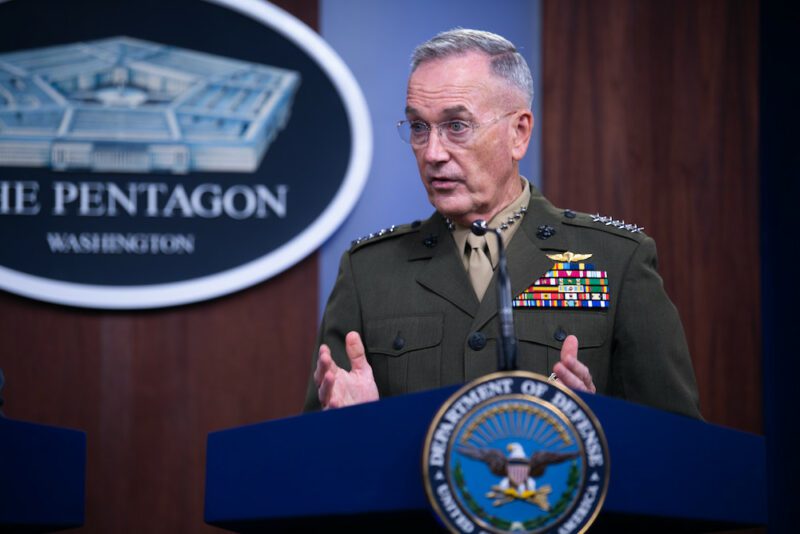 In this file photo from August 2019, Joe Dunford speaks to members of the press during his first joint press conference. Image: Staff Sgt. Nicole Mejia/DOD

Global security and aerospace company Lockheed Martin has announced the election of former Chairman of the Joint Chiefs of Staff Gen. Joseph Dunford Jr. to its board of directors, effective Feb. 10, 2020.

“General Dunford’s service to the nation at the highest levels of military leadership will bring valuable insight to our board,” said Marillyn Hewson, chairman, president and CEO of Lockheed Martin. “His experience in complex, global operations and risk management, including cybersecurity threats, is a tremendous asset and will enhance board oversight in key business areas.”

Dunford is a retired U.S. Marine Corps general. He served as the 19th chairman of the Joint Chiefs of Staff, the nation’s highest-ranking military officer and the principal military adviser to the president, secretary of defense and the National Security Council, from October 2015 until his retirement in September 2019.

His previous assignments include serving as the 36th commandant of the Marine Corps and the commander of all U.S. and NATO forces in Afghanistan. Commissioned in 1977, Dunford served as an infantry officer at all levels, including commanding the 5th Marine Regiment during Operation Iraqi Freedom.

Dunford will serve on the corporation’s Classified Business and Security Committee and Nominating and Corporate Governance Committee.