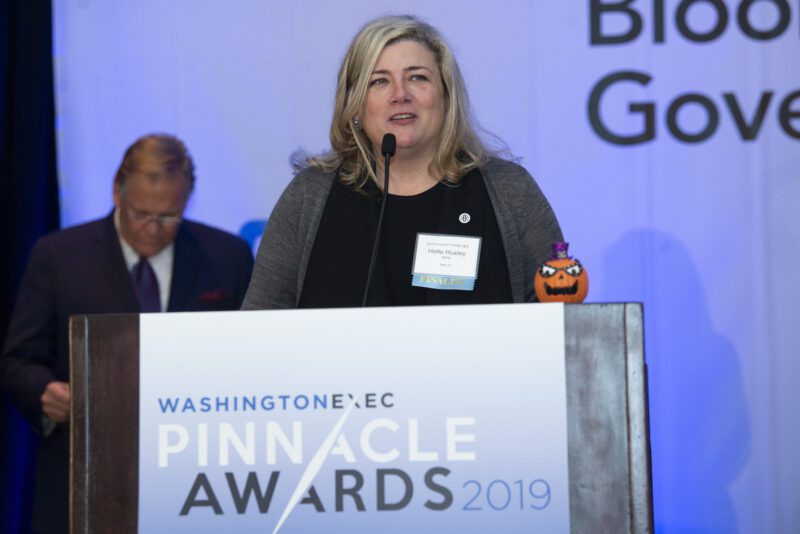 SOSi’s Helle Huxley on Oct. 31 won the WashingtonExec Pinnacle Award for the Marketing Executive of the Year.

Helle Huxley, vice president for marketing and communications at SOS International LLC, was one of two winners of the WashingtonExec Pinnacle Award for the Marketing Executive of the Year.

Huxley joined SOSi in April, just as the company was about to complete its third acquisition within a 2-year period. She brings to SOSi more than 25 years of experience across business sectors to exercise her specialties in growth-oriented marketing and communications, branding and messaging, mergers and acquisitions, and persuasive public relations.

Throughout her career, Huxley has served on both U.S. coasts in high-level marketing roles in entertainment and government contracting, for public and private companies, and in both large and small firms. Before SOSi, Huxley served as chief marketing officer at Cadmus, a technical and scientific consultancy, and before that, at Aquilent, a digital and cloud services provider later acquired by Booz Allen Hamilton.

Huxley was also vice president of marketing at Deltek GovWin and served as a creative executive at both Warner Bros Television and Sony/ATV Music Publishing. She’s on the board of directors of STEM for Her, a nonprofit that helps girls and young women pursue STEM-related careers, and on the board of advisers of production company Drama ¾.

Huxley said these experiences working with board-level executives further enhances her ability to understand and reach a broad range of audience members.