You are at:Home»Execs to Know»Meet the 2019 GovCon Awards Finalists: E3/Sentinel’s Andy Maner 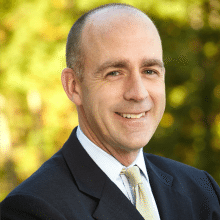 Andy Maner, CEO of federal solutions provider E3/Sentinel, is a finalist in the 2019 Greater Washington Government Contractor Awards – commonly referred to as the industry’s Oscars.

Maner, a finalist in the $75 million-$300 million revenue category for Executive of the Year, is a leader in the federal IT and consulting space in addition to being the third employee of the Department of Homeland Security.

Maner’s experience includes the West Wing, merging and selling companies and serving in senior positions in a foreign war zone.

Shortly after his junior year as a communications and political science major at Purdue University, Indiana, Maner got an internship with Sheila Tate who was press secretary to first lady Nancy Reagan from 1981 to 1985. Tate later served as President George H. W. Bush’s press secretary during his campaign in 1988.