A gala to benefit the EagleForce Warrior Foundation that supports veterans and their families will be held Saturday, June 8, at The Fairmont, D.C.

EagleForce provides aviation and ground transportation for wounded sailors, soldiers, airmen, Marines, National Guardsmen, Reservists, Coast Guardsmen and their families as they transition to and from their initial critical care in military hospitals and subsequent treatment in Veterans Affairs medical centers, civilian hospitals and clinics.

“I knew I wanted all of our wounded warriors to have a similar advantage,” she said.

While the military does its best to help, within the limits of federal regulations, even the strongest of the strong need a little help sometimes, she said. Campbell’s foundation recognizes the need for an all-hands-on-deck approach to support recovery.

“The gala is designed to be both a celebration to honor excellence in the military community and a benefit gala to raise the necessary funds to continue to provide vital services to support health care and financial programs for our wounded warriors,” Campbell said. “It is by far our biggest and most important fundraising event of the year.” 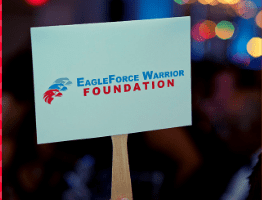 The keynote speaker at the gala will be retired Adm. James G. Stavridis, who spent 37 years in the Navy and rose to become a four-star admiral. The longest-serving combatant commander in recent U.S. history, Stavridis is the author of “The Accidental Admiral,” “The Leader’s Bookshelf: 50 Books That Make Us Better Leaders” and “Sea Power: The History and Geopolitics of the Oceans.”

Two individuals will be honored at the gala with Lifetime Achievement Awards. Lt. Gen. Robert S. Ferrell, who retired from the Army in 2017 after 38 years of service, is now vice president of federal strategy at World Wide Technology. Retired Sgt. Maj. Alford L. McMichael served more than 36 years in active duty in the Marines. In 2003, he was appointed as the first senior noncommissioned officer for Allied Command Operations to Supreme Headquarters Allied Powers Europe (NATO).

The Health Hero Award will go to Lt. Gen. Patricia D. Horoho, who is now CEO of Optum’s Military, Veterans and Federal Government group. In December 2015, Horoho completed her 4-year tour of duty as commander of the Army’s Medical Command and 43rd Army surgeon general. She was the first female and nurse in the 239-year history of the Defense Department to hold these posts.

WATCH: Holly McKenzie and Sandra Davis on the Nov. 10 March of Dimes’ Heroines of Washington Awards