You are at:Home»Execs to Know»Featured Executives»Harish Luthra: With Cloud Adoption, ‘There is No One Who Wants to be Left Behind’ 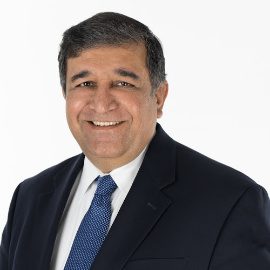 When Harish Luthra transitioned to SAP National Security Services in 2011, he advocated for a new approach to maximize the company’s capabilities.

That approach — partnerships with hyperscalers that would provide hardware and infrastructure so NS2 could do what it does best — created a foundation for the growth the company would go on to experience and for Luthra’s transition into his current role as managing director at SAP NS2.

To that end, the company has partnered with Amazon Web Services, Microsoft Azure and Google Cloud Platform to provide hardware and infrastructure so SAP and SAP NS2 can focus on software.

“We also use a lot of their services which are available in their environment to accelerate and optimize our applications,” Luthra said. “An example would be, instead of us trying to create something from scratch for backups and recovery, AWS has a cloud service, Microsoft has a service, Google Cloud Platform has a service. We want to integrate our technology with what they provide and make sure we can do it in a much more effective and cost effective way and also provide the functionality in a much more accelerated manner.”

In 2018, NS2 saw the fruits of that strategy grow in leaps and bounds, Luthra said.

While federal agencies across the board are trending toward cloud adoption, the Defense Department seems to have taken the lead, Luthra said. Chief information officers are particularly drawn to cloud when there are special demands on security and low total cost of ownership, he said, and that also goes for organizations outside of the federal space.

“There are a lot of commercial organizations which are pushing for cloud adoption as well,” Luthra said. “We’re seeing this across all the industries. There is no one who wants to be left behind.”

In 2016, SAP NS2 worked with the Agriculture Department to transition to cloud. The Defense Logistics Agency is another customer that worked with NS2 to place a product in the cloud.

“That has gone extremely well,” Luthra said. “Now, they’re considering bringing all of their applications from the data center to the cloud as well.”

DOD has various initiatives to migrate applications to the cloud. In December, the Texas Department of Transportation signed a contract through IBM with SAP NS2.

“We’re being approached by international ministries of defense as well,” Luthra said. “We have a lot of momentum, and the good news is the adoption is going well and customers are committed to innovating.”

SAP NS2 is also working on expanding its reach to more potential customers and has its eye on infrastructure industries like telecom, pharmaceuticals and financial services.

Joining from Price Waterhouse in 1997, Luthra has worked for German-owned SAP and its U.S. subsidiary SAP/NS2 for 21 years. During his tenure with the global company, he has held several roles, including consulting leader within SAP NS2 and national vice president of professional services, for SAP Public Services. In 1999, he established the company’s professional services practice.

As Luthra transitioned to NS2, his focus began shifting from professional services into the rapidly growing area of cloud services. He and his team are working over the next several months to launch five to six new cloud-related products to add to their current offerings and he’s focusing on continual security enhancements including a partnership with CounterTack that resulted in an endpoint protection platform built on SAP Secure HANA Cloud.

Luthra said he’ll be focusing over the next year or so on launching these new products as well as honing in on security and bringing down overall costs.

In his spare time, Luthra contributes financially and with his time to NS2 Serves, a charitable nonprofit that trains and employs military veterans in SAP technology. Luthra is vice president of curriculum oversight and job placement for NS2 Serves.

He and his wife of 26 years have a son who is working in New York.