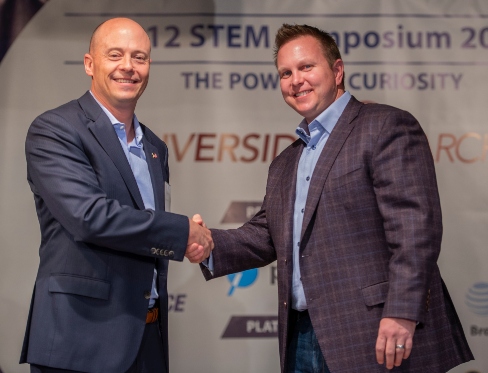 Pursuing a STEM education and career isn’t easy and will lead to occasional failures — but encouragement, fueling the passion and learning from those missteps are all part of the journey.

That’s according to Kevin Kelly, president at CACI International Inc – LGS LABS and winner of the STEM Champion Award at WashingtonExec’s sixth annual K-12 STEM Symposium last month. He spoke at the Nysmith School for the Gifted in Herndon, Virginia about how he became inspired and encouraged to follow a STEM path.

Kelly shared his stories in hopes of passing that inspiration along to the students and parents in the room through three key messages.

The first is for parents and educators to encourage young people to follow STEM careers — but to encourage with passion, not direction.

“I was inspired by my physics teacher in high school,” Kelly said, “who wanted to demonstrate Newton’s First Law to us live and in person.”

The law states an object will remain at rest or in uniform motion in a straight line unless acted upon by an external force. So, Kelly’s teacher got on a skateboard, put a toilet seat cover on her head and a bathrobe on to look like Isaac Newton, and rode down the halls of the local Chantilly High School juggling apples.

She was demonstrating that the apples, when thrown in the air as she’s moving on the skateboard, are going to come back down in motion — not stay behind her where she let them go.

“It was one of the first times I saw an adult apply passion to teaching STEM,” Kelly said.

His second message, also to the adults and educators, is to help feed that passion for STEM. 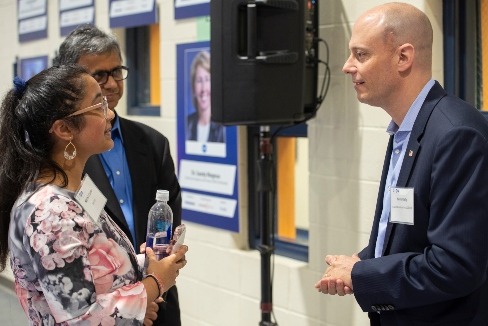 During his first year at Penn State University, Kelly’s physics professor wanted to demonstrate the conservation of energy — in front of 350 freshman students in a giant auditorium. The professor hung a bowling ball from a long, thin steel cable. He walked into the audience, grabbed the bowling ball, walked back up on stage, put his back against the blackboard and let the bowling ball go. It swung all the way out into the audience, but if the professor stayed where he was when he let the ball go, it wasn’t going to hit him.

It was the little bit of air friction as the ball swung out that slowed it down just enough to not come back and hit the professor’s chest. But because he was so passionate as he was teaching, he forgot about the ball and took steps forward. The bowling ball came back and smashed right into his chest.

“We were trying to figure out, did he do this on purpose or was this an accident? And later, we came to learn with all of his crazy stunts that he was definitely doing this on purpose to teach us,” Kelly said. And from then on, nobody missed this professor’s freshmen physics class.

“That’s my message for the adults in the room, is to feed the passion,” Kelly said. That’s always what his company stresses to its employees. “Don’t direct somebody into a STEM career where they don’t want to be, if they have some opportunity and they embrace math, science, technology, feed that passion as much as you can.”

Not everyone belongs in a STEM-related field, but for those who find something exciting about it, that influence and passion from peers can be life changing.

Kelly’s last message is intended for those pursuing or considering an education in STEM. Failures will happen, but it’s about learning from those failures and reengaging, and understanding that not everybody will excel in all areas of STEM.

In fact, he shared a story about receiving an 18% on a quantum physics midterm during his third year in college.

“I had the wonderful opportunity of retaking quantum physics, I got a B+ the second time,” Kelly said, “but I want to share that story with you because it’s not all about success.”

There will be difficult times in pursuing a STEM education and career, but just as Kelly did, it’s about getting back up from those difficulties and failures.

Now, Kelly is an electrical engineer with a master’s degree in engineering running a technology and innovation company, spreading his personal lessons learned to inspire the next generation of STEM professionals.