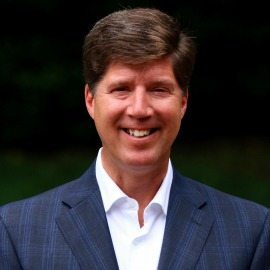 Families, sponsors, donors and supporters will gather at the Children’s Inn at the National Institutes of Health’s annual An Evening for Hope Gala on May 11 — but for gala chairman Todd Pantezzi, his passion for the cause is personal.

In its sixth year, the gala will be held at The Ritz-Carlton in Tysons Corner, Virginia, with radio and TV personality Tony Perkins as the evening’s honorary emcee. The Children’s Inn is a private nonprofit on the NIH campus in Bethesda, Maryland, that provides free lodging and support services to families of children with rare, undiagnosed and life-threatening diseases.

The proceeds from the gala will support the organization’s mission, as it provides a home to more than 1,700 children and their families every year, as patients participate in clinical trials at NIH. And in turn, the inn supports NIH medical discoveries.

And this year’s event is more critical than ever because of the extensive roof damage the inn suffered in August. Its main wing has been closed for repairs for six months, so the nonprofit has been renting off-site apartments and hotel rooms to continue accommodation and arranging transportation to and from NIH.

“For many children staying at the inn, a clinical trial at the NIH is the last and best hope for a successful treatment or cure. This year, the community’s support of the inn’s children and families is more critical than ever,” said Pantezzi, 2019 An Evening for Hope chair, Children’s Inn trustee and vice president of Perspecta’s Health Group Business Development.

Pantezzi was asked to join the organizing committee in 2011 to support generating sponsorships, because he has been part of the industry since 1992 and is well-connected.

But he also has a personal interest in getting involved.

“I lost my first son to leukemia in 2005 and really was just looking for a way to somehow honor his memory, do something to help other families who had gone through the same awfulness, the same tragedy that I went through and just somehow give back to the community,” Pantezzi told WashingtonExec.

Being involved with the gala is a confluence of Pantezzi’s personal interests and desires, and his professional roles leading growth or large federal integrators heavily involved in NIH and health agencies.

In the Q+A below, Pantezzi expands on what The Children’s Inn means to him, why he’s so passionate about the cause and the impact it has on families that are in the same situation his family was in years ago. This interview has been edited for clarity.

Why is this cause and organization so important to you?

It’s definitely around my son Trevor and just trying to honor his memory. I was a liberal arts major growing up, and I fell into this industry truly by happenstance in 1991 with a firm that did work for federal health agencies. I happened to start doing a lot of business across the campus at NIH, I happened to have been invited to the inn the first year it was open and saw it.

Then my son was born with leukemia in 2003. He was a little baby, and we spent just over two years — really his entire life — living the life that the families at The Children’s Inn at NIH also undergo. We were at Children’s National and trying to live out of a hospital room with a terribly sick baby. It’s just an awful, awful way to live.

Realizing what The Children’s Inn does and having been in the inn before and seeing that it was almost exactly like my circumstance — parents trying to keep a family together, trying to keep working and also having to deal with your child who every day is undergoing life and death situations and constantly having to deal with doctors, and so on. And then you’re trying to do things like find a place to sleep and find a meal, and all the logistics of trying to have a life. The inn strives to help not just children but the families as well. There can’t be a better organization for me to be involved in because it’s exactly the circumstance I went through and have lived.

It really couldn’t be more perfect in terms of myself and my interests and feeling like I’m somehow doing something for these families, and somehow getting involved in a way that is meaningful. Being a liberal art major, being a non-science person, I’m never going to cure a disease. I’m also not wealthy enough to be able to fund finding a cure for a disease.

The inn facilitates hundreds, if not thousands, of pediatric patients and children participating in clinical trials, participating in research at NIH, because the inn is there to house them. That generates so much more scientific research.

What does your role in the gala entail? What do you do as chairman?

My job at this point is certainly my network. I think it’s a big part of what I bring — a network of connections in the industry and in the government to promote the brand of the event and be an ambassador for the inn. That’s actually sort of a dual role that I have now. I’m formally a trustee with the inn and I’m essentially meant to be an ambassador for the inn. So, I promote it any chance I can just as a matter of course.

But in terms of chairing the organizing committee, it used to be very tactical. I was spending a lot of my time actively contacting companies and individuals trying to get them to be aware of the event and aware of the gala and getting them to sponsor and getting government people to attend. It’s evolved over the last half dozen years where now my role is much more overall vision and strategy and leadership. And we have this wonderful team of volunteers that focus on the discrete elements of what needs to be done.

It’s certainly sales and generating the donations from industry — and we’ve already exceeded $1 million for that this year.

What has been the most rewarding part of your involvement so far?

It’s seeing the kids and the families when they’re at the gala and when they see the support. We always have one or two families that stand up and address the whole audience. They share their stories and they talk about the how [the inn]has impacted them. And I pretty much lose it every year when I hear and see them.

Why is this year’s gala particularly special?

There are a lot of infrastructure needs at the inn. The damage to the roof and basically rebuilding half the place just happened to coincide with a major strategic plan and capital investment plan that the inn’s board has realized just in the last year or so.

They had a lot of work that needed to be done to the inn already. Then you had this whole roof collapse — and it wasn’t just a roof that collapses; it’s the cost of having to move families off-site and lease other space and so on. Basically, this is an emergency financial situation on top of all of the other campaigns that the board was starting to raise more money for — so there is that from the core infrastructure side.

The other thing is on the scientific front, if you’re particularly looking at cancer research. You don’t need more sick kids, but you do need these kids who are sick to be available to participate in more scientific research. The inn is equivocal to that. Without a place to stay, people can’t come. You need to get them to a site to be part of a study, and the inn really facilitates that.

How are you able to leverage your position at Perspecta, work experience with the federal health market and knowledge of the industry as chairman of the gala?

It makes me feel better about what I do. It gives me more energy in my day doing what I do.

And it also helps me twofold. No. 1,  it helps me understand what industry was seen as a value in participating in the event. We ask for significant amounts of money from companies to sponsor — people are good, they want to do the right thing, but you do need to have a business justification. Because I know the market, because I know most these companies really well, I can usually go to them with a very targeted pitch as to why they will want to get involved in support of the inn and why specifically they will want to get involved in sponsoring the gala.

It also helps that I have relationships with government officials — it just helps to know who they are, to know those people who have an interest in me, professionally or personally. It gives me the ability to reach out to them and encourage them to get involved and encourage them to attend the gala.

For more information on An Evening for Hope, visit the website.