You are at:Home»Execs to Know»John Steckel and Daughter Hillary Lengyel Dive Mission-First into Government Contracting 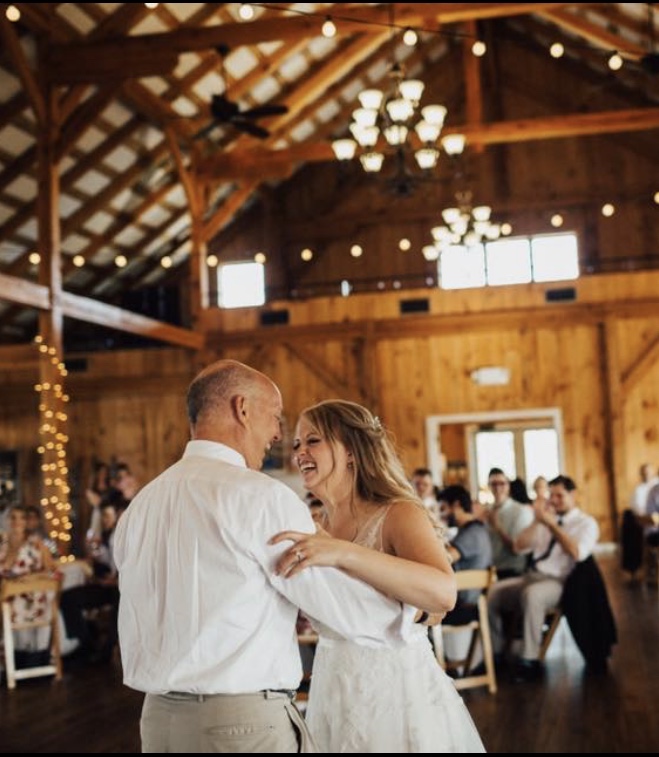 John Steckel is the vice president of business development for AMERICAN SYSTEMS, and his daughter Hillary Lengyel is a systems engineer in commercial health care at Leidos — and while one focuses on services and the other on products, both are driven by mission-oriented companies and meaningful work.

And if there’s one thing they have both learned, it’s that you don’t always know where you’ll end up — no matter the path you take.

In fact, one of Lengyel’s “dream jobs” was to be a teacher like her mother.

“Now I have no clue!” she told WashingtonExec. “I always say if I could win the lottery, I’d open an ice cream shop with my husband.”

Lengyel graduated from Purdue University with a bachelor’s degree in industrial engineering — a field she may not have gotten into without her father’s input.

“I was always good at math and science, and he pushed me to try out some engineering programs to get my feet wet, and I haven’t looked back,” she said.

And Steckel’s military background and government contracting career path influenced Lengyel and helped her get her foot in the door with various industry internships.

“I likely wouldn’t have even heard of the companies I worked for if it wasn’t for him,” she said. “I love my dad and want to support the other men and women out there that have been serving our country.”

Steckel’s father was a career naval officer, so he grew up yearning to serve in the U.S. Navy. In fact, aside from a backup school, Steckel only applied to the U.S. Naval Academy.

He got in, graduated, joined the Navy, served nine years active duty and 12 years in the Navy Reserve as a naval flight officer.

After active duty, Steckel received his MBA from the University of North Carolina at Chapel Hill’s Kenan-Flagler Business School. He was interested in marketing and entered the commercial world working for PepsiCo in operations and at FedEx as a brand manager and marketing specialist. He also worked at other small companies in database marketing or direct marketing.

Then, a fellow Navy Reserve crewman mentioned an opportunity working for defense contractor BAE Systems. At the time, Steckel’s work commute was from New Hampshire to Boston, and BAE Systems was only 20 minutes away — so he snagged the opportunity to cut his commute.

“I didn’t really actively go out to go into [government contracting],” Steckel said.

In fact, Steckel believes he wasn’t a traditional hire for the company.

“I wasn’t in acquisition, I wasn’t one of their former customers and I had been out of the active duty part of military for quite a while at that point in time,” he said.

But BAE Systems was interested in bringing in commercial marketing ideas. So, “they took a chance and hired me,” Steckel said.

And though this was his first real introduction into the government contracting space, Steckel said it was like “coming home,” because after growing up in a military family and serving, he discovered he did well in companies driven by a mission or vision.

“I enjoy it when everybody is involved with accomplishing that mission or vision,” he said.

At the time Steckel was hired, BAE Systems leadership was driven around a “protect those that protect us” mentality,  which really appealed to him.

Steckel later served in leadership positions at Raytheon and Vencore, Inc. before joining AMERICAN SYSTEMS, but he has always followed a mission-focused objective as it feeds his desire to serve.

In his current role, Steckel tries to be a customer advocate for the company, forging the connection between what the customers want (either what they explicitly say they want or implicitly need) and what his company offers.

“We want to continually try to develop customer affinity — not intimacy — but affinity, because affinity adds not just being close to the customer but deriving that common bond between mission and values,” Steckel said. This way, the company can understand why customers want what they want, and figure out how to help them get there.

Lengyel was raised around that service-oriented environment.

“She’s got a very strong sense of service,” Steckel said about his daughter. “She’s very driven by reaching a mission and doing good for the world.”

In school, Lengyel was heavy into volunteerism, and in college had internships with service-oriented companies like Raytheon and BAE Systems.

And during those internship years, having people know she was her father’s daughter was interesting waters to navigate. Other interns had parents in the company, too, but Lengyel felt some pressure at times because “he was always a very important person at these companies, and I didn’t want to let him down,” she said.

It wasn’t that way post-grad, though.

Lengyel said her first job after graduating college was as an industrial engineer for an airline catering company, and her team calculated all the labor associated with catering commercial airlines. Now, at Leidos, her team develops software applications to be used in the health care space and make lives easier for health care providers.

“It was just a natural fit for her because it had meaning — it had that mission,” Steckel said.

And that’s something that was important to Lengyel. Though she didn’t always think her career path would cross with her father’s, once she got into engineering, she had a feeling they would work in the same industry.

“I think the companies he and I both have worked for have had strong beliefs in helping others, and that’s something I’ve always felt strongly about,” Lengyel said.

And finding that match between what the company does and its culture with personal beliefs is crucial to career growth and personal success, per Steckel’s advice.

Steckel and Lengyel may not have the opportunity to work together in the future, as Steckel hopes to be retired on the beach in 10 to 15 years.

“I’m coming to the end of my career,” he said, “so in many ways, I’m looking to take advantage of life and enjoy the world here in the next couple of years or so.”

However, he will continue to help people and companies if he can. Lengyel, on the other hand, while wishes she could be on the beach with her father, said she’ll likely still be working hard toward that beach retirement goal.

As for now, she’s always had an interest in going down the management track one day, “so maybe that’s where I’ll be,” she said.

But being a millennial earlier in her career comes with challenges.

“I think there are always people that are going to think that a millennial is going to be lazy or unreliable,” she said. “Add to that the fact that I’m a woman, which to my surprise, there are still people who find female engineers to be a joke — things can be tough to overcome sometimes! I just have to keep working hard and proving people wrong.”

“Just talking with them and doing interchanges and discussing what they’ve been through and situations they were exposed to and then be willing to reach out and ask questions,” he said. “That’s incredibly valuable.”

And in return, he is constantly learning from his employees and interns.

But perhaps the advice Steckel turns back to most is to do what you love.

“If you’re not doing things that you love, you’re just not going to do them well, and your performance is going to reflect that whether you mean to or not, because you’re just not having a good time,” Steckel said.

A Family That Sports Together

And aside from talking about industry trends, what’s going on at work and providing advice, Steckel and Lengyel have many shared interests.

“We’ve always been two peas in a pod,” Lengyel said. “We love to watch sports together, cook together, annoy the rest of the family with inside jokes — that sort of thing.”

Steckel loves to bike and attend sporting events and concerts in his free time but says Lengyel is also a sports fanatic.

“She can tell you anything you want to know about hockey,” he said, and Lengyel and her husband are big basketball fans. And because Lengyel’s father-in-law is Steckel’s former classmate and colleague, and they were in sister squadrons together and go back almost 40 years, family gatherings are a lot of fun.

But what’s taking up most of Lengyel’s free time these days is her 7-month-old daughter — a newer dynamic to Steckel and Lengyel’s father-daughter time.