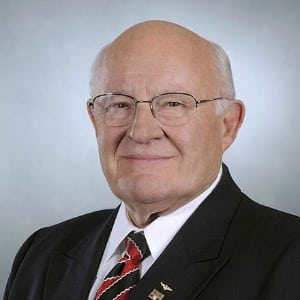 Jack London, executive chairman and chairman of the board of CACI International Inc, has received a U.S. Naval Academy 2019 Distinguished Graduate Award.

London is a graduate of the U.S. Naval Academy class of 1959 and the Naval Postgraduate School of 1967, and was recognized with four additional receipts at a March 22 ceremony.

The graduate award, given by the Naval Academy Alumni Association, recognizes graduates demonstrating a lifetime commitment to service, personal character and distinguishable contributions to the country.

London has more than 46 years of leadership experience at CACI, including serving as president and CEO from 1984-2007 and overseeing the company’s growth from a small services firm to an IT partner to the federal government. He’s been chairman of the board since 1990, and currently guides CACI’s major strategic initiatives and transactions, and is referred to as the “founder of the modern-day CACI,” according to his bio. As executive chairman, London established CACI’s Culture, Character, Integrity, and Ethics Committee in 2015.

“The Academy instilled in me the importance of good character,” London said. “It inspired me to champion the values of ethics and integrity, both personally and professionally, throughout my career. At CACI, our enduring success in behalf of our shareholders is built on our dedication to ethical character, national service, and patriotism that the Academy so powerfully represents, and so aptly imparts to every graduate.”

Prior to this recognition, London was inducted into the Naval Postgraduate School Hall of Fame in 2011 and received The George Washington University’s Alumni Achievement Award in 1996 — where he earned his doctorate in business administration in 1971. He was also awarded an Alumni of the Year from the university’s School of Government and Business Administration in 1987, and CEO of the Year from the university’s executive MBA program in 2003.

London’s extensive Navy career includes 12 years of active duty with during the Cold War, where he served as officer, naval aviator and carrier helicopter pilot. He also served during the Cuban Missile Crisis and holds 33 at-sea deployments.

During the Vietnam War, London was an as aide and administrative assistant to the vice chief of the Naval Material Command. And as part of the U.S. Navy Reserve, he served as an aeronautical engineering duty officer and commanding officer of reserve units in the Naval Air Systems Command, ultimately retiring as a naval captain.