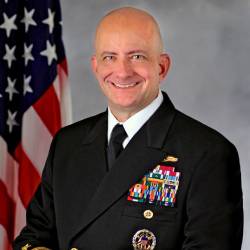 The agency responsible for collecting and analyzing geospatial intelligence is set for a change in leadership.

The Defense Department and the Office of the Director of National Intelligence has selected Navy Rear Adm. Robert Sharp as the next director of the National Geospatial-Intelligence Agency.

Sharp, who was confirmed by the Senate for a promotion to vice admiral, will take over the agency during an official change-of-leadership ceremony in February.

Sharp serves as the commander of the Office of Naval Intelligence and director of the National Maritime Intelligence-Integration Office.

He succeeds Robert Cardillo, who has led the agency since 2014. Cardillo has been credited with helping drive a technology transformation at the agency, including opening an outpost in San Francisco with the aim of hiring data scientists and analysts from Silicon Valley.