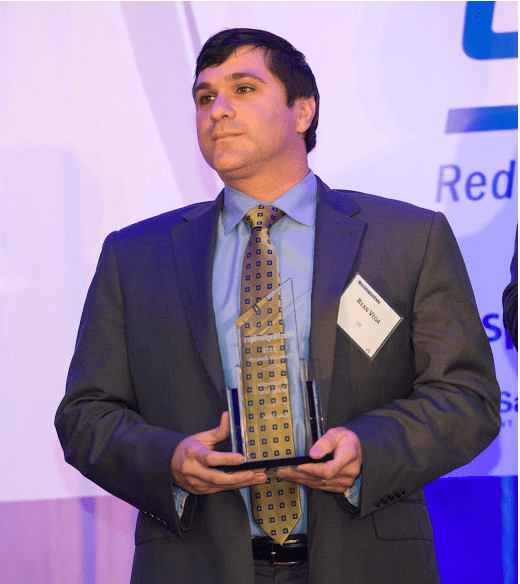 Dr. Ryan Vega has worked over the past few years to help solve one of the Department of Veterans Affairs’ most-pressing challenges: finding a better way to identify and intercept veterans at risk of suicide.

In addition to more robust suicide-prevention effort, the Diffusion of Excellence Initiative, launched in 2015, aims to leverage the power of innovation to assist veterans at risk of a number of health risks.

And it’s seen success in both dollars — and lives — saved.

For his efforts, Vega, who serves as director of the Diffusion of Excellence Initiative, was honored with an IT Innovator of the Year award as part of the 2018 Pinnacle Awards.

“Dr. Vega is leading at the edge of where the science and art of innovation and diffusion intersect, synergize, and ultimately build a culture of learning and innovation at VA,” says one industry executive who works with Vega and his VA team.

The Diffusion model, spearheaded by Vega, lays out “gold status practices,” which aim to make improvements in across the spectrum of care offered to veterans.

For example, improvements to the scheduling has saved over $22.6 million and over 10,000 hours of work.

Meanwhile, an effort to reduce the risk of pneumonia for hospitalized veterans — Project Hospital-Acquired Pneumonia Prevention by Engaging Nurses, or HAPPEN — resulted in a 90 percent decrease in non-ventilator, hospital-acquired pneumonia and has saved 12 lives.

All told, some three dozen gold status practices have been replicated over 400 times at 150 VA facilities — impacting an estimated 96,450 veterans.

Winners were named from list of 50 finalists across 13 categories.