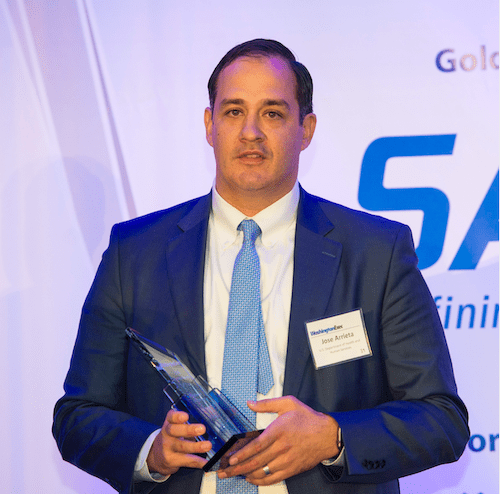 Jose Arrieta is the man who brought blockchain technology to the Department of Health and Human Service.

Arreita, associate assistant undersecretary for acquisition at HHS, leveraged the cryptographic-based digital record-keeping system to help the agency make smarter buying decisions, creating the first blockchain in the federal government — and only second in the world — to be used for public procurement.

Arrieta’s accomplishment netted him an IT Innovator of the Year award as part of the inaugural Pinnacle Awards. The award recognizes government chief technology officers, chief information officers and program directors who were change agents within their agencies.

Arrieta leveraged the power of blockchain, laying the cutting-edge technology over existing systems enabling data to be incorporated into a blockchain in a secure cloud environment. The switch encompassed five different contract-writing systems that handle more than 100,000 contract actions each year — to the tune of $24.2 billion

Previously, when HHS went to enter into a strategic sourcing engagement, acquisition staff would have to manually collect data on contract spending from the agency’s various bureaus and operating divisions and then have to painstakingly sort the information in spreadsheets sorted by price points and terms and conditions.

But with the power of blockchain, HHS can now perform analysis on 10 product categories in a single second second, providing contracting professionals with critical data right at their fingertips.

All told, the agency spent just $500,000 to roll out the system within just seven weeks — and has already seen a return on investment of over 1,000 percent.

Winners were named from list of 50 finalists across 13 categories.