You are at:Home»Events»2018 Pinnacle Awards: Executive Assistant of the Year SOSi’s Terra Baker 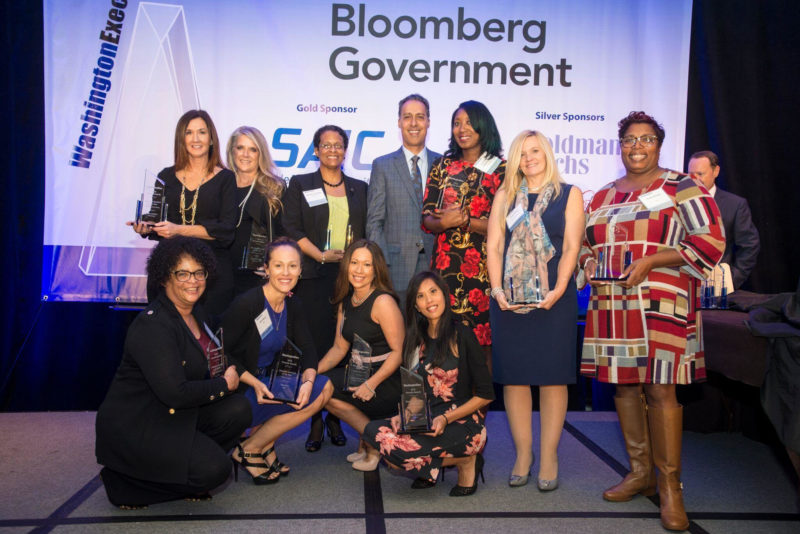 Terra Baker to the far right, with the rest of the EA of the Year Award winners and JD Kathuria.

She’s the crucial force keeping the leadership of SOSi’s most complex areas of operation on time, on budget and on task.

Baker “has the uncanny ability to be everywhere at once, yet she always has the time to extend herself to support a colleague request or to champion a corporate philanthropic cause,” the executive says.

Baker’s achievements recently landed her the EA of the Year Award as part of the 2018 Pinnacle Awards, which honor leaders and influencers in the GovCon space.

One of Baker’s other significant undertakings has been taking on a role supporting the senior vice president of the company’s second-most complex department — the business development group.

“This extends her duties beyond support for a fast-moving, globally oriented-team to include support of a department that is highly deadline driven and at any point in time, could have hundreds of live and pending proposals in process,” a company executive wrote in her nomination.

Baker has also been instrumental in “establishing new rigor around initiatives at SOSi during a year in which SOSi experienced “substantial changes to structure, personnel, processes and
Technologies,” according to her nomination. “In the weeks following the acquisition of two new key business lines, Ms. Baker’s knowledge of business processes and intuitive capacity to promote change management effectively has been invaluable to SOSi’s customer facing operations in MSG and Business Development.”

The 2018 Pinnacle Awards were presented by WashingtonExec on Nov 1.