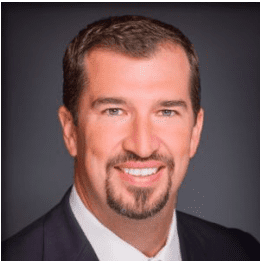 “This year, an 8-foot-tall Amazon Alexa robot will be hosting the event with me,” said VanDyke, director of civilian government nonprofits for Amazon Web Services. “I thought Rebecca and I did a really nice job of sharing the stage together. I hope Alexa is just as gracious.”

The Nov. 10 event at the Hilton McLean Tysons Corner will bring together more than 600 military, government, corporate and community leaders, “showcasing the engagement of the community in making Red Cross services available for the region,” organizers said. The Networked for Care theme will draw attention to the role of technology in expediting and expanding services.

VanDyke said networking — in both the traditional and technological sense — is essential to the work the Red Cross does.

“We salute those who play a role in the great work of the Red Cross — the service of men, women and military families who are there on the front lines to prepare for, respond to, and help citizens recover from disasters,” VanDyke said. “At AWS, we also firmly believe that technology can play an important role in advancing the mission of the Red Cross, and can help the organization scale their efforts to make an even greater impact.”

Several individuals will be honored at the event. David Rubenstein, co-founder and co-executive chairman of The Carlyle Group, will be recognized with the Lifetime of Service Award. Retired Navy Adm. Michelle Howard will receive the Tiffany Circle Distinguished Woman Warrior Award. Sean Breslin will accept the Community Partner Award on behalf of AvalonBay Communities, and Teresa Carlson will accept the Corporate Hero Award on behalf of Amazon.

The Corporate Hero Award goes to an organization that demonstrates commitment to the Red Cross mission in areas such as employee engagement, preparedness, support for the individuals in the armed forces and their families and others. VanDyke said Amazon and its subsidiaries have worked with the Red Cross for many years.

Following the devastating hurricanes of Harvey, Irma and Maria, American Red Cross teamed up with AWS APN affiliate VoiceFoundry to leverage Amazon Connect and implement a new call center to supplement Red Cross volunteers,” VanDyke said. “The call center consisted of three VoiceFoundry specialists who were supported by twice-daily calls that included leaders of the Red Cross, VoiceFoundry and Amazon. The team was assembled overnight and, early the next morning, it began analyzing and re-working the call routing rules while training the Amazon operators as volunteers to handle what were often highly emotional phone calls. In the 48 hours that it took to provision the new phone lines, the team had set up an entirely new call center, established the routing rules, and trained the new operators  —  a process that would normally have taken four to five months for a call center of equivalent size.

Each year, the Red Cross responds to 64,000 disasters, about 175 each day, with a staff composed primarily of volunteers.

“This is one of the reasons that the annual Salute to Service gala is such an important event — it’s an opportunity for us to honor the heroic efforts of the men, women and military families who help our nation prepare for, respond to, and recover from emergencies,” VanDyke said. “Community leaders and corporate partners — such as Adm. Michelle Howard, as well as The Carlyle Group and AvalonBay Communities, all of which are being honored at the upcoming Salute to Service gala — play an integral role in supporting the mission of the Red Cross, and enabling that large base of volunteers.

The Salute to Service sponsors are: