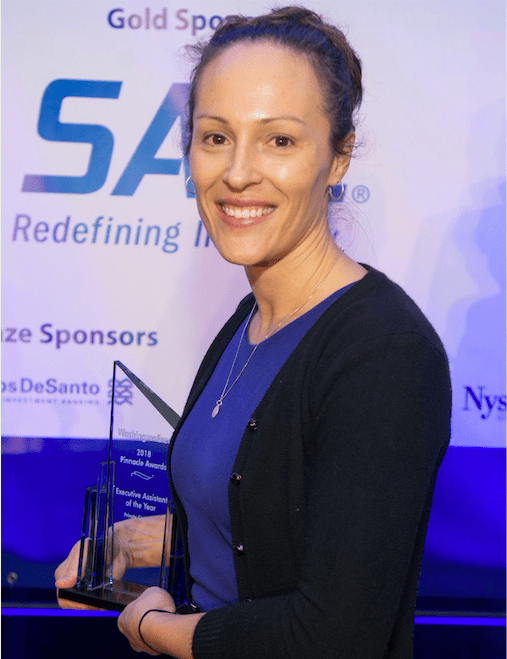 Erin Miles, executive assistant to the CEO of DMI, may have one job listed on her business card. But in reality, she does the work of at least four people, executives at the firm say.

Miles was recognized with an Executive Assistant of the Year award as part of the 2018 Pinnacle Awards, which recognizes leaders and influencers in the GovCon space.

In her role, Miles not only supports the day-to-day activities of the CEO and founder; she also supports the company’s chief legal officer in his legal correspondence and activity dealing with mergers and acquisitions.

In her nomination for the award, company executives called her “an instrumental conductor behind the scenes.”

One of Miles’ key responsibilities is managing and approving the corporate travel program — a role that often requires her to approve last-minute travel arrangements after hours and on weekends. Even if it’s 3 a.m. and it requires 10 different phone calls, Miles makes it happen, executives say.

In addition, Miles heads up the firm’s corporate volunteering programs and company event planning that contributed to the firm being recognized as a “Top Workplace” by The Washington Post.

“She truly does the job of four people and all of this with a smile on her face and a great
disposition towards others,” according to Miles’ nomination. “She is regularly praised by employees, customers, and business partners alike.”

Winners were named from list of 50 finalists across 13 categories. In the “Executive Assistant of the Year” category, five EAs from public companies and six EAs from private companies were named winners.