You are at:Home»News»2018 Pinnacle Awards: EA of the Year ManTech’s Tina Ferguson 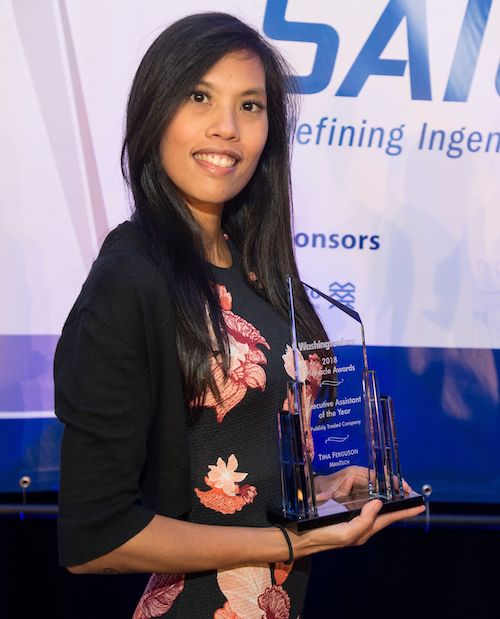 Tina Ferguson is not your typical executive assistant.

But Ferguson also provides expert-level support to the company’s senior vice president and general manager, and unlike many EAs, Ferguson provides direct support to programs and customers.

“Tina’s work exceeds the responsibilities of a typical EA,” one executive at the company says.

For these efforts, Ferguson was named Executive Assistant of the Year as part of the inaugural Pinnacle Awards, which honor leaders and influencers in the GovCon space.

“She provides direct support to programs, setting up smaller agile purchases collectively totaling more than $100K per year,” according to her nomination. “She works with Program Managers, Task Order Leads and even customers to order and deliver the necessary products to support critical needs. Not many EAs in the industry deliver this level of service: work that directly impacts and improves the customer relationship.”

On a large, new contract the company recently won — worth nearly $1 billion — Ferguson took on the role of training the travel and project coordination of staff on travel and expense report systems.

“This would normally be done by senior analysts traveling from our headquarters offices … but because of her expertise and the respect Tina has earned, she is trusted with this important task and relied on to save both time and money,” one executive says.

Ferguson also serves as the liaison to the company’s customers in the intelligence community.

“Tina is literally the face of ManTech to our industry and community partners,” according to her nomination. “She sets up meetings and events for the Business Unit – and sometimes the entire company.”