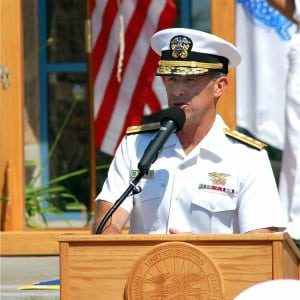 President Donald Trump announced June 22 he would nominate Joseph Maguire, the president and CEO of the Special Operations Warrior Foundation and a Navy veteran, to be the next National Counterterrorism Center director.

Maguire has served as president and CEO of the Special Operations Warrior Foundation since September 2013, after serving three years on the organization’s board of directors.

As a career naval special warfare officer, Maguire retired from the Navy in 2010 as a vice admiral after 36 years in uniform. He commanded at every level in the Naval Special Warfare Command, which is the Navy component of U.S. Special Operations Command.

“Joe is an experienced national security expert whose long and distinguished service to our nation in the special operations warfare community will be immensely valuable as he takes on some of our nation’s most challenging counterterrorism issues in a rapidly shifting international security landscape,” said Director of National Intelligence Dan Coats in a statement.  “His return to NCTC, where he previously served with great distinction as the deputy director for strategic operational planning and as a member of the National Security Council’s Counterterrorism Security Group, would be a welcome addition to the CT community.”

A native of New York City, Maguire has a B.S. from Manhattan College and a MSTI from the Naval Postgraduate School in Monterey, California. He also was a national security fellow at Harvard University. He and his wife, Kathy, currently reside in Tampa, Florida.