Think fast. What’s the science behind Superman and the powers he possesses on Earth versus on his native planet of Krypton?

Audience members began funneling answers as Dr. Ann Bonitatibus guided them through a discussion of gravity, photosynthesis and molecular composition.

“He has indestructibility, and he’s able to recharge his power,” she said of Superman during a talk at the 2018 K-12 STEM Symposium at Nysmith School for the Gifted. “There’s a science behind all of that.”

Bonitatibus, principal of Thomas Jefferson High School for Science and Technology, spoke with Dr. Tinell Priddy, inaugural principal of Academies of Loudoun, the new STEM-focused school set to open to students Aug. 23. The April 14 symposium drew more than 4,000 attendees for a day of interaction with STEM leaders from government, academic, nonprofit and corporate organizations.

The two leaders provided some key insights into education around the areas of science, technology, engineering and math, and approaches two of the region’s leading schools use to support learning.

Bonitatibus walked the audience through science concepts behind the powers of Wonder Woman, Superman and Batman. 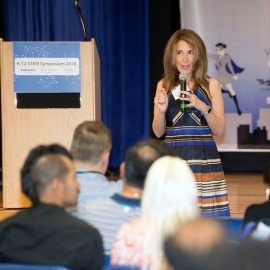 Academies of Loudoun is the largest high school Loudoun County has built, coming in at 340,000 square feet and three levels. It houses more than 40 specialized labs. With emphasis on research, collaboration, innovation and guiding students toward making meaningful contributions in STEM fields, the new school will offer an array of fields in which students can focus. Leaders are also working to reach students with diverse interests and learning strategies.

“In STEM education, I believe it’s time to stop pushing all of our students down one path, and that’s to just a 4-year college, but instead steer students toward the path that’s right for them,” Priddy said. “At the Academies of Loudoun, I am building a new school facility and I open every day out on the construction site wearing my pink hard hat. But I’m also building a team of STEM superheroes — my Justice League, if you will — that is committed to helping each of our students achieve their college and career goals upon graduation.”

Both principals discussed the importance of academic workload and pressure on teens.

Bonitatibus said TJ is addressing issues around work level and stress in its school improvement plan, but those things are not unique to TJ. 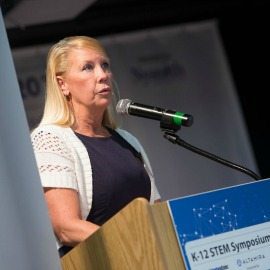 “We have a responsibility as educational leaders to safeguard our children from certain stressors,” Bonitatibus said. “Our children are children. They do not need to be working the hours or going through the stress of someone who is 30.”

The school emphasizes giving back to the community in a variety of ways, including its STEM-bassadors program and other outreach efforts.

Academies of Loudoun deliberately steers away from using achievement tests in the admissions process, Priddy said, instead channeling inventories that give information about, for example, a student’s approach to learning and ability to synthesize information.

“High school is going to go by really fast, and once it’s gone, it’s gone,” Priddy said. “Enjoy the moments. Live the experiences. Do as much as you can while maintaining balance.”