You are at:Home»Execs to Know»Exec Moves»Pentagon Swears In New CIO 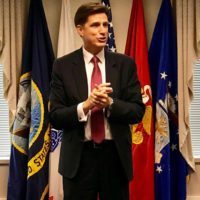 Deasy took his oath May 7, assuming responsibility for DOD’s management of information, communications and cybersecurity. At his swearing-in ceremony, Deasy thanked Deputy Secretary of Defense Patrick Shanahan, and said he was no stranger to collaborating with people from the Pentagon.

“I’ve always thought, ‘Wouldn’t that be great if, someday, there was a way I could be a part of that in a bigger way?’” he said after taking his oath. “I am absolutely thrilled to be here.”

As DOD CIO, Deasy is primary adviser to the defense secretary for matters of information management, IT, and information assurance, as well as nonintelligence space systems, critical satellite communications, navigation and timing programs, spectrum and telecommunications.

Before joining DOD, Deasy was global CIO of JPMorgan Chase, where he was responsible for technology systems and infrastructure across all of the firm’s businesses worldwide, overseeing a budget of more than $9 billion and over 40,000 technologists. He previously served as CIO for General Motors North America, Tyco International and Siemens Americas, and also held leadership positions at Rockwell Space Systems Division, including as director of information management for Rockwell’s space shuttle program.