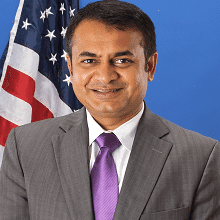 This recognition came from the Virginia Chamber of Commerce at the annual Virginia’s Fantastic 50 Awards Banquet on April 26.

Alpha Omega came out on top in the service category as a leading IT and consulting firm, with a revenue growth rate of 1,610 percent between fiscal years 2013-2016.

“Creating new possibilities for both our employees and our customers has been the driving force for our success!” said Alpha Omega President, Gautam Ijoor. “Over the last 6 months, our company has grown 3-fold in size, winning new contracts worth over $50 million. This is primarily due to having an effective team, to whom I’d like to dedicate this award.”

The Fantastic 50 program is the only annual statewide award that recognizes Virginia’s fastest-growing businesses. To be eligible, a company must be privately held and headquartered in Virginia, show revenues between $200,000 and $200 million, and demonstrate positive revenue growth plus positive net income in its most recent fiscal year.