At 19, Cady Coleman knew she wanted to study chemistry, but she had no plans to pursue a career as an astronaut.

Then, she met someone who changed her mind.

“While I was in college, Dr. Sally Ride who was the first American woman astronaut came to MIT and talked to the women alumni,” Coleman recalled. “I shook her hand — and she doesn’t remember, we have talked about it since — but it was very meaningful for me to meet someone I could identify with. It had never occurred to me to do that kind of job until I met her and saw somebody who had a job where it really counted that they were well-educated and passionate about what they were studying and at the same time there was this sort of adventure in their lives.” 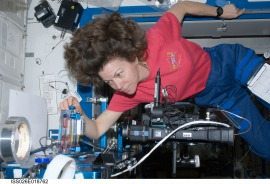 From that one meeting, Coleman went on to finish her degree on an ROTC scholarship, join the Air Force and eventually work with NASA. During her 27-year career, she completed two Space Shuttle missions and spent six months on the International Space Station as the lead science and lead robotics officer studying the behaviors of liquids, performing experiments in osteoporosis and groundbreaking robotics on the ISS.

Now 57 and a retired Air Force colonel and professional speaker, Coleman is scheduled to speak at the K-12 STEM Symposium on Saturday.

Meeting Sally Ride was a catalyst for her, but at age 19, Coleman had already been under the tutelage of a number of teachers who would shape her life for years to come. Coleman attended Pine Ridge Elementary, Frost Junior High and W.T. Woodson High School in Fairfax County.

She credits her high school chemistry teacher, Mrs. Opp, with inspiring and guiding her down a path that allowed her to have the career success she did, first as a research scientist in the Air Force, then as an astronaut for NASA. 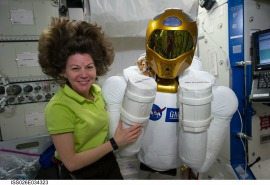 Other teachers left their mark as well. A widely shared YouTube video shows Coleman performing an Earth-space flute duet with Ian Anderson while on the space station in 2012. Coleman said she is a “fairly self-taught” player who drew inspiration from her high school band director, Mr. Lawrence.

“I played in the jazz band because I wanted something that was a little more individual and I liked improvisation,” she said. “So, Mr. Lawrence encouraged me in that, and it was really fun and it gave me a lot of bravery. Then, when I went to college I ended up playing as well.”

Coleman also played in the community after Mrs. Bedinger, the Woodland drama teacher, decided to start a dinner theater in Fairfax and she was asked to play the flute in “You’re A Good Man, Charlie Brown.”

Too nervous to accept the entire assignment, Coleman agreed to play a portion of the program with help from another flutist who played the rest.

A group of male students in her high school physics class unwittingly encouraged her to attend the Massachusetts Institute of Technology, where she earned a bachelor’s degree in chemistry.

“I was in a physics class with just a few guys and they all wanted to go to MIT — and it was really clear that it never occurred to them that I might want to go, too,” she said.

In Coleman’s eyes, MIT was a “nerdy, one-dimensional school,” but she applied just to prove she could get in.

Later, her mother made her visit the school anyhow, and she found well-rounded students just like herself there, she decided to go after all. She later went on to obtain a doctorate in polymer science and engineering from the University of Massachusetts.

Still, there were times when Coleman struggled.

“Even though I’m an astronaut and clearly I must need math and science and physics — and I’m an astronaut who did a mission where most of it was fluids physics — physics doesn’t come easy to me,” she said. “My high school physics teacher Mr. Van Matre would come up with explanation after explanation so that I could find a way to have it make sense for me. I encourage people to remember that just because it doesn’t come easily to you doesn’t mean it’s not right for you. It just means you have to swallow your pride and ask for more explanations or a different way to look at it, or go on the internet and see if somebody can tell you about it in a way that makes sense to you.”

The daughter of a man who worked in the Navy’s Sealab program, Coleman grew up close to the idea of living in unusual and sometimes dangerous places. She was accepted to the NASA program the first time she applied.

She is married to a successful glass artist and has a 17-year-old son.

Coleman hadn’t planned to take on an extra speaking engagement at what for her is such a busy time of year, but when she learned more about the event and that it would be in Fairfax County, she was eager to say yes.

“I feel strongly about encouraging women and minorities to be in STEM,” she said. “I think so much of what made it possible for me to be selected for this job and to have the courage to stand up and ask for it came from those early days, and I wanted to say ‘thank you.’

“I’m excited to be at the CASIS space station booth at the STEM fair because it helps students realize that research on the space station makes a difference in their lives. The CASIS organization leads groundbreaking physical science research on the ISS, and their student experiments and STEM work pave the way for students to see themselves in space.”

While Coleman is obviously passionate about STEM, she encourages young people to also arm themselves with a broad liberal arts education and not try to specialize too soon. Still, she hopes her appearance can inspire students to consider their own potential.

“I really think there’s still a great need for young women and minorities to see people they can identify with just to cement that theory that ‘this could be you,’” she said. “There’s always the theory that everybody can do anything, but it’s about making that theory feel really real, and I think that meeting someone or seeing them in person can have that effect. It did for me.”