You are at:Home»Execs to Know»Trump Nominates Evanina To Stay On As Counterintel Head 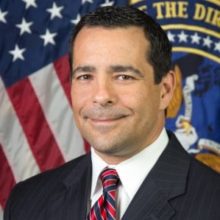 William Evanina, director of the National Counterintelligence and Security Center

As NCSC director, Evanina oversees counterintelligence efforts for the entire the U.S. government and acts as a principal adviser to the director of national intelligence. DNI Daniel Coats said in a statement he was pleased to already have Evanina on his team.

“The President’s intent to nominate him to stay in the position in an elevated capacity reflects great credit upon Bill and his team,” Coats said.

Evanina would be the first Senate-confirmed NCSC director. Congress elevated the position to require Senate confirmation in 2015, after Evanina was already acting as NCSC director.

Evanina recently wrote about the vulnerabilities created by the internet of things, saying the connected ecosystem of smart devices has become a fertile ground for hackers. Both government and industry should think of new, better ways to protect themselves, Evanina wrote in an op-ed for FederalNewsRadio.

Evanina has served in multiple roles within the intelligence and law enforcement communities, beginning his government career in 1996 at the FBI’s Newark Field Office. Since then, he has served as: assistant section chief of the Counterintelligence Division at the FBI Headquarters; assistant special agent in charge of the FBI’s Washington Field Office, where he led operations in both counterintelligence and counterterrorism; and senior executive at the CIA, as chief of the Counterespionage Group. In 2007, he received the FBI Director’s Award for Investigative Excellence.

Trump also nominated  John E. Whitley to be Army comptroller. He is currently a senior fellow at the Institute for Defense Analyses and the Center for Naval Analysis, and research director at the Crime Prevention Research Center.