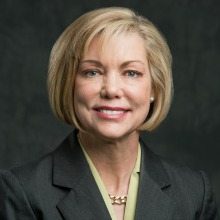 In 2016, Lynn Dugle took over as CEO of Engility, a $2 billion company with approximately 10,000 employees globally. No small task, she transformed the company from low-cost provider work to delivering best-value solutions to its main customer, the federal government.

Under Dugle’s leadership, Engility secured notable contract wins, including a spot on the $50 billion ceiling Alliant 2 deal with the General Services Administration to provide IT services. Other previous deals include intelligence community-related awards totaling over $100 million, a combination of sole source, recompete and new contract wins.

The defense industry veteran previously served in various leadership roles at Raytheon, where she most notably was president of Raytheon Intelligence, Information and Services until she retired in March 2015. A member of the Defense Science Board, Dugle last year was honored by Washington Business Journal, earning an inclusion on its yearly “Women Who Mean Business” list.

Dugle’s track record shows she’s able to weather challenging times and press ahead in an increasingly competitive market. Be on the lookout for additional significant contract wins in the defense, intelligence and space sectors.