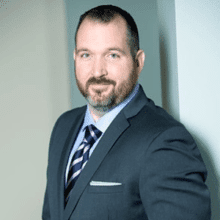 Buchanan & Edwards has ridden a wave of changes of its own creation this year — from launching and rebranding to acquiring a company that diversified its offerings to opening a second office in Chantilly, Virginia.

Vice President of Business Development Sean Gleason said now is an exciting time inside the organization as BE works toward strengthening its position as a solid defense contractor with a history of serving the State Department, the FBI and the Marine Corps, among other clients.

Gleason came to BE in January amid a string of leadership changes, including a new CEO in Dennis Kelly, a former coworker at A-T Solutions who invited him to the company. Previously, Gleason was vice president of strategic growth at InCadence Strategic Solutions. Describing InCadence as “a fantastic company,” Gleason said his conversations with Kelly led him to believe he was in a unique position to offer help at the right time to move BE forward.

“We talked about the growth that was in front of this organization, and that’s exciting,” Gleason said.

BE’s commitment to innovation shines through in the company’s core culture and is one of the key factors that attracted him here, he added. That shows in the chief technology officer organization, led by Sean Spann, whose focus is staying on top of the leading edge of technology so BE can demonstrate solutions to customers.

“We don’t do innovation for innovation’s sake,” Gleason added. “We do it if it increases mission success for our clients.”

Currently, BE is exploring innovations using the blockchain technology behind platforms like bitcoin and Ripple and delving into relevant ways to bring that to government customers.

In March, BE closed the acquisition of Reports and Requirement Company, LLC, a move Gleason said added to the company’s core capabilities and spoke toward its decision to pivot toward a focus on national security. It also allowed BE to broaden its core historical capabilities — data analysis, IT modernization with cloud technology and digital services and business process consulting — to include a range of offerings. Those areas are cyber intelligence and strategy services, data analytics and governance, intelligence operations support and training, cloud and infrastructure and technology transformation services.

In June, BE opened a new office in Chantilly, Virginia, to support its expansion with R2C. Leaders said the new office also gives them closer access to several federal agencies and industry partners in the Westfield area of Chantilly, furthering BE’s plans for strategic development in the national security sector. The company maintains its office in the Rosslyn area of Arlington.

In September, BE launched its rebranding with a focus on “Moving the Future Forward.”

“That tagline really encapsulates everything we’re trying to do for our customers and the way we’re presenting ourselves to industry,” Gleason said. “It’s a very exciting time in the organization.”

Serving Those Who Served

As BE works with customers across the national security spectrum, from defense to intelligence and including many of its long-term customers such as the State Department and FBI, there is a companywide focus on thinking beyond merely going after contracts, Gleason said.

“When we say we want to expand our support to customers in the national security sector, we’re not just waiting for bid activity to come out,” Gleason said. “We’re talking with current customers, as well as customers in sectors where we know we can deliver value and efficiencies through proven innovations from past experience.”

BE also has expanded hiring efforts geared at recruiting military veterans for jobs they are uniquely suited.

“To support customers in national security effectively, I think you have to be genuine,” Gleason said. “You have to care about that complete organization, their mission and the people who serve our nation. That means supporting our veterans as well.”

BE is currently supporting the FBI in consolidating its data centers into two core enterprise facilities, including a new center in Pocatello, Idaho. To fill jobs to meet this mission, BE is leveraging veterans networks. This is just one example of how the company is intentional about veteran-friendly hiring practices, Gleason said. In many cases, military veteran applicants already have the necessary security level requirements, and many of them are also drawn to the great outdoor lifestyle of the area. (Veterans and cleared IT professionals can find openings related to this opportunity here.)

Gleason is a former Marine himself, having served from 1999 to 2004 in signals intelligence and electronic ground warfare. While transitioning to private sector work had a steep learning curve, Gleason said experience as a Marine also helped him hone leadership skills that translated to his current work, such as building a strong team that can thrive under pressure.

“That environment is really dynamic,” he said of his time in the Marines. “You’ve got to make sound and timely decisions and remain calm in the face of fear and uncertainty.”

Gleason said his transition from the Marines went smoothly thanks to meeting an individual during the separation process who mentioned him to an employer.

“My boss faxed me an offer letter in North Africa,” Gleason said. “That doesn’t happen to everyone, and I admit I was lucky. That was 2004. In 2017, there are a lot more resources out there to help veterans transition, but the No. 1 resource is still going to be other vets.”

BE has many of them, and the company is essentially building its own networking system.

“I’ve never failed to respond to a LinkedIn message from someone saying, ‘Hey, I’m getting out of the Marine Corps, who do I talk to?’” Gleason said. “I would encourage everyone transitioning out of any of the services to make maximum use out of the veteran network that’s out there. There’s a real support system.”

One valuable lesson he learned from mentors was realizing your success ultimately should never totally focus on yourself or your title, but rather on enabling those more junior on your team. It’s a perspective that has saved him from costly mistakes, he said.

“As I rose into senior leadership positions both in operations and in business development, it really reinforced the need to hold myself accountable for what my team was doing and then to take every opportunity possible when my team excelled or individuals excelled to highlight that at the individual level,” he said. “I think that’s something people need and it’s something people respect when they look for leadership.”

Gleason continues working toward his executive education at University of Virginia Darden School of Business.