“My father was diagnosed with kidney cancer and had an operation to remove part of his affected kidney,” said the chairman of the D.C. area Kidney Ball. “The procedure was successful; he lived for another six-plus years and was able to see the birth of my first daughter.”

Johnson has been involved with the National Kidney Foundation since 2015 and has served on the executive committee for the Kidney Ball going on three years.

Those efforts mesh well with his position as senior vice president and treasurer of Host Hotels and Resorts, Inc., an S&P 500 and Fortune 500 company and the largest lodging real estate investment trust.

“NKF is an organization Host feels passionate about and is a cause we get behind as a company,” Johnson said. “The company has a long tradition of supporting NKF and the Kidney Ball for over 20 years, and I have a personal connection as well.”

The 37th annual Kidney Ball will be Nov 4. at the Washington Hilton and will feature entertainment from War. The funk band’s hits include “Why Can’t We Be Friends,” “The Cisco Kid” and “Low Rider.” 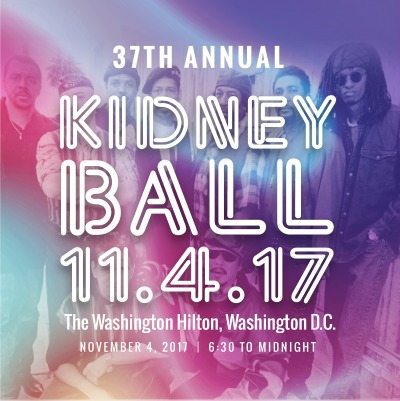 “There are so many great aspects of the Kidney Ball, but the live entertainment is always a blast,” Johnson said. “I have heard (War’s) show is amazing, and I’m looking forward to a fun time.”

While the event will be fun, its underlying focus is deadly serious.

According to the foundation, kidney disease is the ninth leading cause of death in the United States with one in seven people afflicted by the illness. In the D.C. area alone, some 500,000 suffer from the disease.

“Many of us don’t give much thought to our hardworking kidneys, but the truth is one in three American adults are at risk for developing kidney disease,” said Michele Anthony, executive director of the Kidney Foundation. “NKF offers these rules of prevention to lower your chances of getting kidney disease:

• Do not overuse pain medications.

“If you are at risk, you should ask your doctor for two tests that will measure your kidney function: a urine test called ACR and a blood test to calculate your GFR,” Anthony said.

People with diabetes, hypertension or family history of kidney failure are more likely to get the disease. Those who belong to a population group with a high rate of diabetes or high blood pressure — such as African Americans, Hispanic Americans, Asians, Pacific Islanders or American Indians — are also considered at higher risk, Anthony said.

Johnson said Host has worked over the years to raise awareness of the problem of kidney disease and has had companywide participation in a fundraiser walk as well as encouraged associates to get screened.

For more information, visit www.kidneywdc.org. Tickets and sponsorship opportunities for the ball are available here.