You are at:Home»Execs to Know»Exec Moves»CSRA Promotes Yogesh Khanna to Senior Vice President 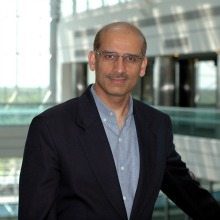 “Yogesh has been a key actor in our growth and innovation as a leading technology provider to the federal government,” CSRA President and CEO Larry Prior said. “Through his dedication and commitment to excellence, Yogesh has pioneered new business offerings and spearheaded our cloud consulting services. This is a well-deserved promotion.”

Khanna has nearly 30 years of experience in the technology industry, and previously worked as CTO for CSC’s North American public sector. He has been CEO of MobileHelix, a mobile application integration company, and has held leadership roles at DynCorp, GTE, MITRE, NEC and COMSAT.

Khanna also serves on Louisiana Tech University’s College of Engineering and Computer Science Advisory Board, and participates in Professional Services Council working groups, ACT IAC and the Northern Virginia Technology Council. He has also held leadership positions on several TechAmerica commissions, and was recognized as an “Innovator of the Year” by Washington Technology and NVTC in November 2012.