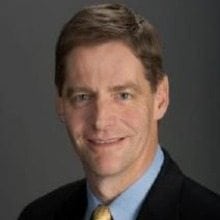 The Columbus, Ohio, company’s board of directors announced the change July 14. Von Thaer comes from DynCorp, a $2 billion company of which he was CEO. His experience includes engineering and management roles with AT&T Bell Laboratories as well as serving as president of Advanced Information Systems at General Dynamics.

He has also served as president of the national security sector at Leidos, Inc., which focused on intelligence, surveillance, reconnaissance, cyber, logistics and systems solutions.

Wadsworth has been president and CEO of Battelle for nine years. He will assist in the transition through the end of the year as Von Thaer officially begins his role Oct. 1.

“It’s wonderful to see John and the Battelle board select Lou to succeed Jeff as CEO of a globally-renowned organization,” said WashingtonExec Commentator Mark HuYoung. “Big shoes to fill, but Lou is up to the task. This could serve as a solid capstone to a great career trajectory. Lou is a strategist and problem solver at his core, and not only has leading transformation through innovative science and technology been a tenet of his career, it his passion. I have no doubt he will uphold and advance the reputation for world-class solutions with which Battelle is synonymous.”

Wadsworth said he is “thrilled” to welcome Von Thaer to the company.

“He is an innovative problem solver who brings nearly 35 years of engineering and management experience in technology development and deployment to solve complex national security and society issues,” Wadsworth said. “Lou has led large organizations and helped them succeed in rapidly changing environments. He will be a tremendous asset to Battelle.”

Von Thaer graduated from Kansas State University with a bachelor’s in electrical engineering and also holds a master’s in electrical engineering from Rutgers University. He is a member of the Defense Science Board and serves on the board of directors for the National Intelligence University Foundation and the Transition Assistance Program for Survivors. He is also a trustee at Kansas State.

Battelle’s board of directors began searching for a new CEO in 2016 to ensure a successor before Wadsworth’s retirement. Von Thaer said he is honored to have the opportunity to lead the 87-year-old company.

“This company has such a strong reputation for solving the toughest challenges of today and delivering world-class results for clients, and I cannot wait to join this fantastic team,” he said.