You are at:Home»Execs to Know»Exec Moves»Former Defense Official Frank Kendall Rejoins RSAdvisors as Executive in Residence 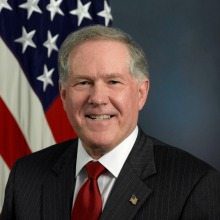 Aerospace and defense advisory firm Renaissance Strategic Advisors has announced a familiar face has rejoined the company. Frank Kendall will take on the role as executive in residence, bringing over four decades of acquisition, technology and defense expertise.

As the longest-serving undersecretary of defense for acquisition, technology and logistics, Kendall was responsible for acquisition and procurement; logistics and materiel readiness; installations; operational energy; chemical, biological and nuclear weapons; the acquisition workforce; and the defense industrial base. He was the leader of Pentagon’s “Better Buying Power,” aimed at improving the performance of the defense acquisition enterprise.

“We are excited to have Kendall rejoin the RSAdvisors team after such a distinguished term in government service,” said Pierre Chao, RSAdvisors founding partner. “His keen analytical mindset, depth of expertise and intellect will be a great and welcome addition to the firm.”

Kendall has over 40 years of experience in engineering, management, defense acquisition and national security affairs in private industry, government and the military. He has been a consultant to defense industry firms, nonprofit research organizations, and DOD in the areas of strategic planning, engineering management and technology assessment. Kendall was vice president of engineering for Raytheon Company, where he was charged with management direction to the engineering functions throughout the company and for internal research and development.

Within government, Kendall was director of tactical warfare programs in the Office of the Secretary of Defense and held the position of assistant deputy undersecretary of defense for strategic defense systems.

Kendall is a former member of the Army Science Board and the Defense Intelligence Agency Science and Technology Advisory Board and he has been a consultant to the Defense Science Board and served as senior adviser to the Center for Strategic and International Studies. He also spent 10 years on active duty with the Army, serving in Germany, teaching engineering at West Point and holding R&D positions.

Kendall is a distinguished graduate of the U.S. Military Academy at West Point and he holds a master’s degree in aerospace engineering from California Institute of Technology, a Master of Business Administration degree from the C.W. Post Center of Long Island University, and a law degree from Georgetown University Law Center.