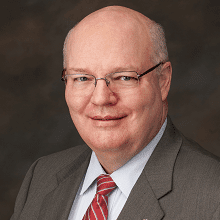 The Aerospace Corp. has made changes to its leadership team, promoting some familiar faces and adding new names to support its strategies for future innovation and growth.

Among the executive changes:

Dr. Craig Heatwole has been promoted to general manager of the Imagery Programs Division, after Kevin Bell was elevated to vice president of Space Program Operations.

Dr. Jeff Emdee takes on the role of general manager of the Space Based Sensing Division, upon Russ Averill‘s retirement. Emdee’s role is effective July 17.

Andrew Dawdy is the general manager of the new Space Defense Division within the Defense Systems Group. Dawdy stays on as acting director for Advanced Development and Planning until that role is filled.

All appointments are effective immediately, with the exception of Swallow and Emdee.

“The promotion of these proven visionary leaders validates their exceptional track record of anticipating and fulfilling our customers’ needs as they advance the space enterprise,” said Steve Isakowitz, Aerospace president and CEO. “At the same time, our leaders are taking the necessary steps to advance our new corporate initiatives.”