You are at:Home»Events»An Astronaut, Optometrist and Medical Pioneer Walked Into the STEM Symposium… 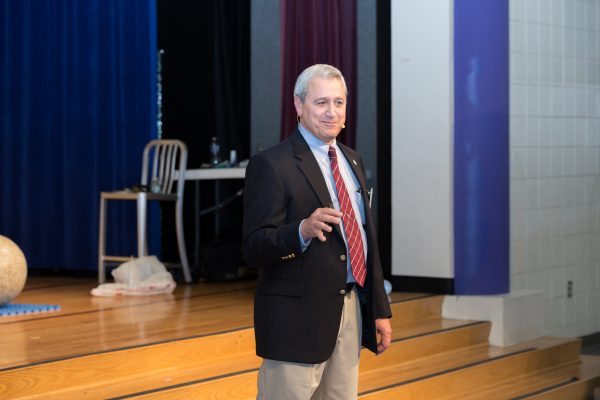 No, it’s not a set-up to a joke — it really did happen. And in fact, the stage wasn’t even crowded. Lawrence “Larry” DeLucas, astronaut, biochemical researcher and principal scientist at the Aerospace Corp. gave students and parents alike a glimpse into just what adventures a career in STEM could hold in store.

“With a career in science, you can expect the unexpected,” DeLucas said.

He never thought he would be a scientist growing up; he was more focused on baseball and basketball. But a high school chemistry teacher got him excited about the subject.

He got a bachelor’s degree and then a master’s degree in chemistry. His Ph.D. is in biochemistry, where his research on protein crystallography — how protein atoms and molecules align — caught the interest of the dean of the optometry school when they were playing basketball.

“He said, ‘Why don’t you go to optometry school while you get your Ph.D., because we need people looking at molecules in our eye that are responsible for vision, and we’d want to hire you,'” DeLucas said, so he did.

But DeLucas was more interested in research than in being an optometrist and continued his work in protein crystallography. That science provided the foundation for numerous medical and pharmaceutical advances, including HIV/AIDS and cancer drug treatments. Over the course of his career, DeLucas has been a co-inventor on 43 patents involving protein crystal growth, novel biotechnologies and structure-based drug design.

Little did DeLucas know his high school interest in chemistry would one day take him to space. Crystals form more perfectly in space, where the molecules move slower and aren’t affected by weight.

“If you have an experiment on the space shuttle, you get to watch it take off,” DeLucas said. “I don’t cry at funerals, but that day I was crying, my wife was crying — everyone was crying.

“Then I turned to them and said, ‘I’m going to do this. I’ve got to do this.'” They laughed and said it would never happen. “I tried to get selected for seven years, and finally I got lucky.”

DeLucas was selected as a member of the seven-person crew of Space Shuttle Columbia for Mission STS-50, called the United States Microgravity Laboratory-1 Spacelab mission. As a payload specialist, he participated in more than 30 different experiments during his 14-day flight.

As part of emergency training, astronauts parachute into the ocean off the coast of Miami with a mini raft.

“I stayed out there for 18 hours in that little raft, without food — but they do give you water,” he told STEM Symposium attendees. “But NASA’s pretty nice; they know you might get hungry, so they give you a collapsible fishing pole. But as you have nowhere to cook it, it only works if you like sushi.

“I just decided to starve until I vectored a plane to come find me,” DeLucas said.

More from the STEM Symposium

There were lots of other attractions at the STEM Symposium, from members of Congress to . What was your favorite part? Let us know!