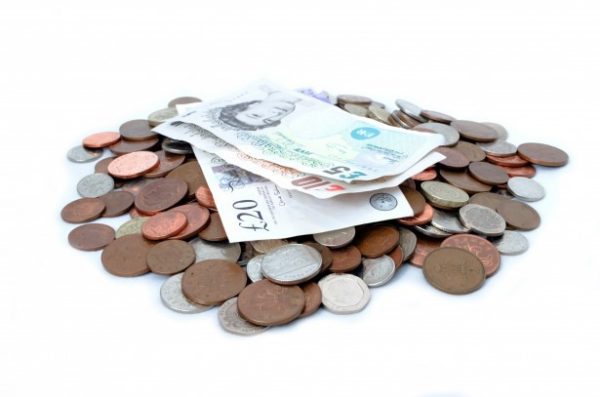 Federal non-defense contractors may have to absorb a $15.4 billion cut next year if President Donald Trump pays for his planned surge in defense spending by cutting funding to other discretionary programs, according to Bloomberg Government analysis.

While the $54 billion defense budget increase Trump wants would be a boost for many of the biggest military contractors such as Lockheed Martin Corp. and Boeing Co., many of those same vendors are also major sellers to civilian departments, muting the overall impact on their bottom lines.

Using the $54 billion figure and other assumptions about Trump’s plans, it’s possible to estimate how agencies and contractors will be affected.

The first assumption is that Trump intends to completely offset the military increases with equal reductions in other discretionary spending. He’s said that he doesn’t plan to touch the big entitlement programs — Medicare and Social Security — though he may cut Medicaid later as he makes changes to the Affordable Care Act.

Trump’s defense budget increase would require Congress to raise the Budget Control Act’s spending caps. Using the Overseas Contingency Operations, or war, funding account wouldn’t require raising the budget caps, because OCO funding is exempt. Using the OCO account would mean less pressure to offset the increase with cuts elsewhere in the budget. It appears that Trump’s intention is to increase base defense spending by $54 billion rather than use OCO funding.

The second assumption is that the departments of Homeland Security, Justice and Veterans Affairs won’t face cuts. In fact, the DHS budget will have to increase to pay for the border wall and additional personnel that recent executive orders have outlined. Trump’s tough-on-crime stance, as well as his expressed concern for veterans, also makes reductions for Justice and VA unlikely.

Combined, the three agencies accounted for $46 billion of the $476 billion in fiscal 2016 federal contract obligations. 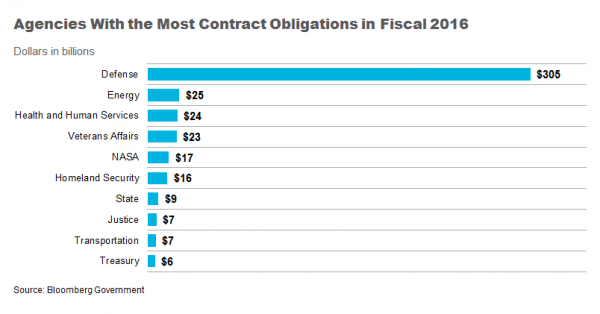 Agencies with the Most Contract Obligations in Fiscal Year 2016, from Bloomberg Government

The agencies that Trump is likely to cut have a total projected budget of $418.5 billion, which is both the fiscal 2016 enacted level and the basis for fiscal 2017 spending in a continuing resolution.

If the defense budget is to be increased, and the deficit, tax revenue and the entitlement programs are not changed, other discretionary agencies will have to pay the bill.

These agencies spend varying portions of their annual budgets on contracts and some of the pain of budget cuts will inevitably land on the contractors.

Trump’s proposed budget is only the first salvo in what will be a long and contentious budget process. Some in Congress will resist Trump’s proposed cuts, but with his party in control of both chambers, what the president wants will carry great weight.

Companies with contracts at the vulnerable agencies need to take a hard look at what they were expecting in fiscal 2018 and understand the increased risk they are facing.

This is an excerpt from an analysis by Senior Defense Analyst Rob Levinson. Learn more about our in-depth government contracting coverage.