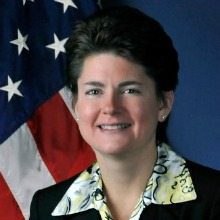 Finding a “coalition of the willing,” as Joyce Hunter put it, is critical for women to succeed in both STEM careers and in government. Mentors and peers can actively support their female colleagues through explicit recognition (“Well, as Jane said…”), making space for everyone’s voice (“What do you think, Ellen?”), and by encouraging each other to take chances and believe in themselves.

Hunter is former deputy chief information officer for policy and planning at the Agriculture Department. She studied sociology, and was not planning on becoming an IT professional. Roat, on the other hand, had been building computers since her high school days, and chose to enter the Navy, where she could follow her passion for technology. Today, she’s the chief information officer of the Small Business Administration.

Ely had a different story still: She liked science growing up, but her father didn’t think it was an appropriate career for her. She studied speech pathology, but ended up in government contracting. Now, she’s the director of IT schedule programs at the General Services Administration. Villalobos has a law degree, and became the principal deputy associate director at the Office of Personnel Management.

It was a lively and honest discussion, which touched on issues professional women in all sectors face every day: impostor syndrome, balancing confidence and assertiveness without being “bitchy,” and, of course, what to do about men.

“There’s a lot we can learn from men,” Ely said. It’s a back and forth. “We learn from each other.”

At the same time, Villalobos said, it’s helpful when men are able to understand their own biases. It’s the first step to becoming better allies and advocates.

Most importantly, leaders — from schoolteachers to CEOs — need to take responsibility for looking out for their teams. Take the lead on diversity, starting with your applicant pool. Create an environment where everyone feels heard. And when the girls are getting bored with their male peers blowing up stuff in science class, take charge and encourage everyone to try something new.

“There’s no growth in your comfort zone,” Ely said, “and no comfort in your growth zone.”