You are at:Home»Execs to Know»Q&A with 2016 GovCon Award Finalist Gen. John Coburn, Chairman and CEO of VT Systems 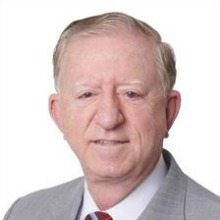 The Northern Virginia Chamber of Commerce and Professional Services Council have unveiled the finalists for the 14th Annual Greater Washington Government Contractor Awards, the premier awards event for the Washington area government contracting community. The winners will be named at a Nov. 1 gala dinner at the Ritz-Carlton Tysons Corner.

WashingtonExec talked with one of the finalists, Gen. John Coburn, chairman and CEO of VT Systems, to get his take on leadership, among other issues.

WashingtonExec: What is your organization’s plan for growth over the next 3-5 years?

Gen. John Coburn: There are two ways in which VT Systems can grow: organically and through acquisitions. As such, VT Systems is currently bidding on several substantial contracts in which we hope to hear from soon, and also have at least two to three major acquisitions planned over the next 3-5 years. Additionally, we are planning for considerable expansion in international programs, and to roll out a substantial number of new products across the company.

WashingtonExec: What are the fastest-growing components of your business?

Gen. John Coburn: The electronics sector is where we are seeing the most growth at VT Systems. It doesn’t matter if you are on top of Mt. Everest—you still want to be connected. This area has continued to grow because it’s connected. We have seen rapid growth in the area of the company that washes jet engines. We have also entered a new field of rapid growth—the construction of drone bodies.

WashingtonExec: What differentiates you from the competition?

Gen. John Coburn: VT Systems is a very diverse company with tremendous synergy across each of its companies. Diversification equals strength, therefore we can give our customers great quality at a competitive price. Additionally, we have numerous international agreements that allow us to keep our fingers on the latest technology in each of our core business areas.

WashingtonExec: What would you say are the top one or two leadership qualities necessary to be a great leader?