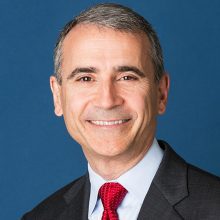 The Aerospace Corporation announced June 28 the appointment of Steve Isakowitz as president and CEO upon the retirement of Dr. Wanda Austin on Oct. 1.

“After a year-long search process, the board of trustees is pleased with the result,” Chairwoman Ambassador Barbara Barrett said. “Building on Dr. Wanda Austin’s legacy of excellence and accomplishment, Steve Isakowitz has the right set of skills and experience — in government and industry — to lead Aerospace in a rapidly changing environment of constrained customer resources, challenging threats and exciting new space technologies.”

The selection of Isakowitz was a unanimous decision by the board and its selection committee, which was chaired by former Secretary of the Air Force Michael Donley, as part of the board’s planned succession process. The board was assisted in its search process by the executive search firm Spencer Stuart.

Donley said Isakowitz was selected as the top choice from a slate of candidates because of his broad range of diverse experience in space management, science and technology, budgeting and financial administration in both government and corporate environments.

“On behalf of the board and The Aerospace Corporation, I want to thank Dr. Austin for her more than three decades of service to Aerospace and the nation,” Barrett said. “A pioneer, innovator and mentor, Dr. Austin led Aerospace with great vision and capability.”

“I am honored to have had the privilege of leading this great Aerospace team as we delivered 100 percent mission success to every customer,” Austin said. “Steve is a proven leader across the space enterprise. I am confident that we will transition seamlessly and the organization will be positioned for even greater success.”

“I am extremely excited to be leading this extraordinary organization as we develop solutions, innovate and continue to deliver mission success for all of our customers,” Isakowitz said. “Technological progress, global competition and security threats are all increasing at rates unparalleled in the history of the Space Age, and I look forward to collaborating with customers and the talented Aerospace team to tackle the important challenges of the 21st century — which will surely be known as the century of space.”

Isakowitz served as president of Virgin Galactic from 2013 to 2016 and as its chief technology officer from 2011 to 2013. At Virgin Galactic, Isakowitz had broad leadership responsibilities, which included the development of privately funded launch systems, human spaceflight vehicles, advanced technologies and other new space applications.

Previously, he held a wide variety of senior engineering, business and management roles across the private and government sectors, including positions at NASA, the Office of Management and Budget, the intelligence community and the Energy Department.

Isakowitz earned his bachelor’s and master’s degrees in aerospace engineering from the Massachusetts Institute of Technology. He currently serves on various advisory boards at both the Massachusetts Institute of Technology and California State University Long Beach. Isakowitz was previously selected by the transportation secretary to serve on the Federal Aviation Administration’s Commercial Space Transportation Advisory Committee.